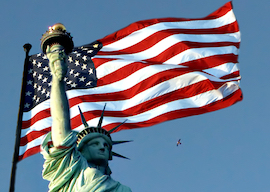 Last week, Dean Baquet, the executive editor of The New York Times, informed his staffers that due to the collapse of their conspiracy to overthrow the president by disseminating their Russian conspiracy theory, the Times was pivoting to Plan B: to dump Trump by promoting their racism conspiracy theory.

As reassurance that this latest intrigue would not fizzle as ignominiously as the Times’ previous machination, Baquet proudly pointed to their 1619 Project. This commemoration of the first blacks arriving in Virginia 400 years ago megalomaniacally

aims to reframe the country’s history, understanding 1619 as our true founding, and placing the consequences of slavery and the contributions of black Americans at the very center of the story we tell ourselves about who we are.

How exactly retconning American history will get rid of Trump was left vague, but Baquet was confident that it was all part of the Times’ seamless plot.

By the way, that’s some hilariously shameless boasting about the power of The Narrative to warp minds.

As I’ve pointed out, The Narrative is pushed less by printing fake news or by completely censoring true news than by the power of the prestige press to pick out ideologically convenient items from the vast surfeit of events and declare them the news about which we are all supposed to have a “conversation.”

Did, say, a Catholic schoolboy “smirk” at a “tribal elder”?

In contrast, in the wake of the vaunted Black Lives Matter protests in Ferguson, did four Teens of Color in St. Louis, shouting “Kill the white people,” hammer a white man to death?

Why are you interested in a local police blotter detail?

And if there is a lot of news for powerful interests to pick and choose amongst, there’s even more history.

Which anniversaries are treated as late-breaking news and which are seen as mere dusty arcana is another exercise in Narrative supremacy.

Consider an example of a dog that has barely been allowed to bark: A number of milestones in Christendom’s heroic struggle to stamp out Islamic slave raiding, such as Thomas Jefferson dispatching the U.S. Marines to “the shores of Tripoli” in 1804 and the Royal Navy freeing 3,000 European slaves from Algiers in 1816, have passed quietly in this century with only minimal 200th-anniversary media commemorations.

“If there is a lot of news for powerful interests to pick and choose amongst, there’s even more history.”

Calling attention to the West’s long, ultimately successful struggle against Muslim slaving is not encouraged because it might be conducive to Islamophobia, which, as the word explains, is bad. On the other hand, obsessing over white American slaving is good, because if it were at all bad then there would exist a word for it ending in “-phobia.” But there doesn’t, so how can you even mention it?

Of course, the Times’ trope that America’s “true founding” was the arrival of blacks in 1619 contradicts another fashionable bit of hype: that America is a Nation of Immigrants instituted by the huddled masses of wretched refuse on Ellis Island.

As we’ve all been instructed in recent decades, immigrants should be “at the very center of the story we tell ourselves about who we are,” much more important than all those boring settlers, founding fathers, frontiersmen, and cowboys, even if, technically speaking, they might have arrived earlier.

And do blacks who aren’t the descendants of slaves, such as President Obama, also get Intersectional bonus points from the 1619 Story Line even though their ancestors sold African-Americans into slavery?

None of these conundrums are useful for the fraught unity of the Democratic Party in 2020; so don’t expect them to be brought up terribly often. It’s much more politically profitable for the Coalition of the Fringes to merely lambaste core Americans for the sins of their forefathers.

Tendentious as these two megalomaniacal myths are, they do raise questions of historical causality, especially when considered in comparison to each other.

For example, which is more important to today’s America: who came earlier, such as blacks, or who came more recently, such as Ellis Island immigrants? In the abstract, I could see the appeal of either argument. Still, it’s hard to hold both ideas in your head at the same time without bursting out laughing.

Similarly, if blacks being in North America for 400 years matters so much, what about American Indians being here for 14,000 years? Shouldn’t Indians have pride of place over blacks?

In truth, Native Americans, with their problems, their introversion, and their masculine patriotism, are now considered kind of boring and, worse, potential Trump voters. So that’s not going to happen.

He suggests that there may be more than superficial average differences between black and white Americans, possibly even cognitive and psychological ones, because before they arrived in the United States, these population groups had this seventy thousand years apart during which they adapted to their own different environments. Reich implies that natural selection may have acted on them differently within this timescale to produce changes that go further than skin deep.

Unlike the mysterious workings of the “consequences of slavery,” for which all we have at present are hand-waving rationalizations, at least we possess a scientific theory for how the past 70,000 years of life in Africa would be imprinted upon the genes of African-Americans: Darwinian selection.

But you are never supposed to bring that up.

Moreover, there are striking contradictions in the conventional wisdom about who is to be held liable for the guilt of slavery and secession. Whites whose ancestors did not arrive until after 1865 are not allowed to escape collective white guilt.

On the other hand, the fire-breathing role played in the Confederacy by America’s top Jewish figures of the mid–19th century, Senators David Levy Yulee (D-FL) and Judah P. Benjamin (D-LA), is felt to be of no relevance whatsoever to contemporary Jews. After all, most of their ancestors arrived post-1865. Indeed, there is so little Jewish guilt over their paladins’ ardent secessionism that Levy Yulee, whose sculpture was unveiled in Florida in 2014, might be the last Confederate ever to be honored with a new statue.

It’s also important to note that in these discussions the term “consequences of slavery” is largely used as a euphemism for “blacks.”

There haven’t been slaves in America for 154 years. So the topic of slavery might seem of little more than antiquarian interest, just as the now-vanished Rocky Mountain locust was a subject of immense concern in the 19th century, but of very little in the 21st.

But polite discourse today demands that we attribute the continued racial distinctiveness of African-Americans—such as their low average wealth and test scores and their high average crime rates—to the Peculiar Institution in order that white Americans be blamed, demoralized, divided, and exploited.

Yet, all over the world, sub-Saharan African communities tend to share somewhat similar characteristics. For example, Melbourne, Australia, of all places, now has a black crime problem.

But now Australia does have blacks. And somehow the Aussies have also gotten themselves the “consequences of slavery.”

Down Under’s new troubles with black gangs must be the fault of white Americans 400 years ago. It can’t be due to conditions in Africa over the past 70,000 years. That’s unthinkable.

A cynic might observe that the purpose of The New York Times venting endlessly about 400 years ago is because Times subscribers have controlled racial policy for the past 55 years.

Yet for about the past 45 years, African-Americans haven’t made much relative progress. Thus during the Great Awokening of the second Obama term, the dogma hardened that today’s blacks are pathetic puppets of events in the increasingly distant past: Emmett Till, redlining, and slavery in 1619.

And therefore whites must pay. (As everybody knows, what it’s really all about is money.)

Nonetheless, it is possible that due to the idiosyncrasies of the American emphasis on freedom that African-American culture has become a hybrid, one conducive to producing world-conquering hip-hop stars, but not terribly productive of achievement in fields where more discipline is required.

The recent thriving of imported black elites with little direct connection to American blacks, such as Obama (who grew up sequestered from African-American culture in the distant Pacific) and his attorney general Eric Holder (who was raised in a West Indian bourgeois bubble in New York), suggests that black nature and American nurture might interact in ways detrimental to the growth of responsible self-control.

For example, perhaps the American emphasis on liberty tends to work poorly for people of sub-Saharan descent? Maybe blacks tend to stay on track better in a less democratic culture, such as snobbish Barbados?

Could it be that one factor that contributes to the disappointing lack of contributions of black Americans outside of entertainment and sports is less a past shortage of freedom and more a current American abundance?