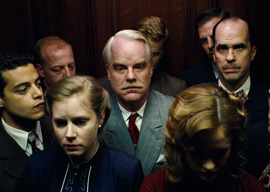 The Master, starring Philip Seymour Hoffman and Joaquin Phoenix in a period piece very loosely based on the origins of Scientology, is a sumptuous viewing experience. Yet nobody at the Hollywood ArcLight theater applauded at the end, a sign that it’s not likely to live up to the immense hopes that film buffs have invested in it.

The movie confirms that writer-director Paul Thomas Anderson is a wonderful artist who doesn”t have much to say about big ideas. Far worse, he doesn”t have stories to tell.

So don”t go expecting plot tension. The Master is largely a buddy comedy. (I found it frequently hilarious, although that’s a minority view.) Anderson’s framework allows Philip Seymour Hoffman and Joaquin Phoenix to deliver some of the most stupendous two-man scenes of acting-for-the-sake-of-acting since Sleuth or Midnight Cowboy. Nothing much in the way of story or character development emerges from these encounters, but they are staggeringly accomplished feats of thespianism.

Anderson’s last film, 2007’s There Will Be Blood, was frustrating despite Daniel Day-Lewis’s “I Drink Your Milkshake“ hamming as oilman Daniel Plainview.

“Anderson’s framework allows Philip Seymour Hoffman and Joaquin Phoenix to deliver some of the most stupendous two-man scenes of acting-for-the-sake-of-acting since Sleuth or Midnight Cowboy.”

Anderson’s recent starting point has been to imagine himself in the shoes of a historical character to reproduce with rare aesthetic skill what the world must have looked like in his protagonist’s time. But then Anderson jettisons most of what actually happened to his putative subject. Instead, he obsesses over variations on his favorite theme of father-son relationships, drawing both from his own dad, a failed actor, and the more satisfying father figure he made out of the late director Robert Altman.

Anderson based Blood‘s thin plot on the first few chapters of Upton Sinclair’s 1927 roman Ã  clef novel Oil! about California prospector Edward L. Doheny. Unfortunately, Anderson appears to have stopped reading before getting to Doheny’s involvement in the notorious Teapot Dome scandal (not to mention the subsequent covered-up murder-suicide in Beverly Hills” most expensive mansion, which helped inspire the epochal detective fiction of another LA oil-company executive, Raymond Chandler.) Anderson instead made up an enigmatic little story about his robber baron’s inexplicable loathing for a young, easily ignorable preacher (a wan Paul Dano).

Anderson’s first movie in five years, The Master, has been assumed to be a definitive exposÃ© of the founding of Scientology by sci-fi hack author L. Ron Hubbard. Instead, it’s a surprisingly sympathetic but not terribly insightful work of meandering fiction vaguely drawn from Hubbard.

Anderson curiously chose to set his story in 1950, a relatively sunny and innocent period of Hubbard’s career before his darker impulses and legal persecution had fully transformed the Dianetics fad into the Scientology cult. Merging Jungianism with the General Semantics popular among science-fiction writers such as his friend Robert A. Heinlein, Hubbard offered a talking-therapy competitor for Freudian psychoanalysis. Dianetics and Freudianism were equally contrived and unscientific, but Hubbard’s initial do-it-yourself concoction was much cheaper.

Now that Freudianism has quietly become an ex-obsession that we shall never mention again, America is flooded with moderate-cost therapists. Yet after WWII, America had a shortage of professional listeners outside of the clergy. Hundreds of thousands of veterans had come back with “shell shock,” which today we”d call post-traumatic stress disorder. As always, many civilians had much they wanted to get off their chests. Millions of people like to talk about their private problems, and for some it even helps. And certain individuals such as Hubbard have a knack for drawing out confessions. People like to talk about their bad sides. If somebody accepts them knowing the worst, it forms a bond.