A Pair of Giants 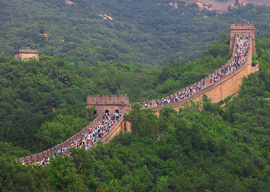 What do the pasts of India and China imply about their futures?

2018’s rapid advances in the race sciences, as exemplified by Harvard geneticist David Reich’s blockbuster book Who We Are and How We Got Here, are reopening old questions such as these.

There are few issues more important to investors and others interested in the rest of the 21st century than the fates of the two giga-countries, China and India. To forecast their futures requires knowledge of their pasts. Moreover, it’s worth noting the differing prejudices with which Western intellectuals have viewed China and India.

To today’s Westerners, China, while no doubt extraordinarily successful over the past forty years, seems a little passé. Granted, there’s little hostile hysteria over China the way the Establishment is currently freaking out over the modest challenge posed by Russia, with only one-ninth of China’s population. But there’s not much enthusiasm for China, either.

In an age of postmodern postnationalism that worships diversity, China is old-fashioned. It’s homogeneous, nationalist, and modernist. China seems to have utilitarian 1950s values.

For example, Chinese higher education isn’t yet competitive on the world stage, but China appears to be doing a decent job of educating the masses in the basics. High Chinese scores on the international PISA test for 15-year-olds shouldn’t be taken at face value, but it’s likely that China is approaching first-world norms in providing equality of opportunity through adequate schooling.

Due to censorship and language barriers, Chinese individuals aren’t well represented in English-language cyberspace. Yet in real life, the Chinese build things, such as bridges that don’t fall down, and they make stuff, employing tens of millions of proletarians in their factories.

The Chinese seem, on average, to be good with their hands, which is something that often makes American intellectuals vaguely uncomfortable. But at least the Chinese proles are over there merely manufacturing things cheaply, so American thinkers don’t resent them as much as they do American tradesmen.

“It’s worth noting the differing prejudices with which Western intellectuals have viewed China and India.”

Much of the class hatred in America stems from the suspicions of the intelligentsia that plumbers and mechanics are using their voodoo cognitive ability of staring at 3-D physical objects and somehow understanding why they are broken to overcharge them for repairs. Thus it’s only fair, America’s white-collar managers assume, that they export factory jobs to lower-paid China so that they can afford to throw manufactured junk away when it breaks and buy new junk rather than have to subject themselves to the humiliation of admitting to educationally inferior American repairmen that they don’t understand what is wrong with their own gizmos.

Reich doesn’t yet have much ancient DNA from China (the Chinese government tries to limit high-tech grave-robbing to Chinese researchers), but the basics are evident. The mighty Han ethnicity, which Reich describes as “the world’s largest group with a census size of more than 1.2 billion,” originated among two separate peoples: millet farmers on the Yellow River and rice farmers on the Yangtze River.

But over the past 5,000 years or so, the two original groups have largely merged genetically into one Han race, so only a north-south cline is left.

Why? The Chinese seldom had many caste restrictions on marriage; the Emperor would assign China’s most eligible bachelors, his mandarin bureaucrats, to rule regions far from their families to cut down on nepotism; and China was gifted with excellent east-west water transport on its rivers, and augmented that with the ancient north-south Grand Canal, which runs for 1,100 miles.

That all contributed to blending together a rather genetically homogeneous nation.

This Chinese lack of diversity is out of style, and yet it seems to make it easier for the Chinese to get things done.

In contrast, India appears more congenial to current-year thinkers. India seems postmodern and postnationalist, although it might be more accurately called premodern and prenationalist.

India is the land of diversity, which is another word for inequality. India is kind of a subcontinental-scale version of a Democratic-ruled American city, such as Baltimore, where world-class talent such as Johns Hopkins resides side by side with intractable social problems.

India puts much of its effort into higher education, while allowing its mass schooling to be awful. Two Indian states tried the PISA test in 2009 and both scored at sub-Saharan levels, with the northern state doing even worse than the southern state. In math, Indian eighth graders performed at the level of South Korean third graders.

India’s ruling party at present is the strident Hindu nationalists under Prime Minister Modi, who are unfashionable in the West. They are trying to introduce the kind of old-fashioned patriotic indoctrination, such as playing the national anthem before movies, that Western countries adapted a century ago.

Good luck to them. You can see why they are trying so hard to instill the kind of national pride that the Chinese accomplished through violently throwing out the foreign devils. Indian infrastructure, for instance, remains shoddy, especially its shameful lack of sewage systems.

But that’s a small price to pay in the minds of American elite opinion for India rising above patriotism.

Another feature that makes our commentariat comfortable with India is that Indians don’t seem to be all that mechanically facile, perhaps especially not the priestly Brahmin caste, with whom Western intellectuals primarily interact.

And the Indians tend to be more verbally agile than the Chinese and more adept at the kind of high-level abstract thinking required by modern computer science, law, and soft major academia. Thousands of years of Brahmin speculations didn’t do much for India’s prosperity, but somehow have prepared Indians to make fortunes in 21st-century America.

Reich’s DNA studies find Indians to be as wildly diverse racially as you would expect from your lying eyes. Reich writes:

A stroll down a street in any Indian city makes it clear how diverse Indians are. Skin shades range from dark to pale. Some people have facial features like Europeans, others closer to Chinese.

Indians are made up of roughly three groups comparable to those who populated Europe since the last Ice Age. First came hunter-gatherers, then Dravidian-speaking farmers from the Fertile Crescent in the Middle East (more Turkish for Europe, more Iranian for India). Finally, the Yamnaya steppe nomads, who were more or less the Aryans of 19th-century German racist legend, invaded both vast peninsulas.

In India, however, unlike Europe, the Aryan conquerors eventually imposed a stupendously elaborate caste system dividing the subcontinent into thousands of inbreeding jatis. While the medieval European system of Three Estates (clergy, nobility, and commoners) could conceivably have some deep Aryan ties to the four main castes of Hinduism, there’s little in Europe like the jatis.

Who are the Brahmins?

They appear to be the descendants of Aryan conquerors who rigged Indian culture to keep their heirs on top for thousands of years. Reich’s right-hand man Nick Patterson found six Brahmin jatis around today that had extreme proportions of steppe invader ancestry.

The strongest signals of elevated Steppe ancestry were in two groups that were of traditionally priestly status who were expected to be custodians of texts written in Sanskrit.

The people who were custodians of Indo-European language and culture were the ones with relatively more steppe ancestry, and because of the extraordinary strength of the caste system in preserving ancestry and social roles over generations, the ancient substructure in the ANI [Ancestral North Indians] is evident in some of today’s Brahmins even after thousands of years.

In other words, some of the racist Aryan theories of European scholars have turned out to be partially correct. Hence, Reich’s revelations, both in his book and in an even newer paper released in the past few days, suggest that we need to review old Western sages’ views of China and India, because they are suddenly relevant again.

Since perhaps Marco Polo, China tended to appeal to the West’s progressive reformers. One huge issue for the European center-left was undermining the feudal nobility’s hereditary rights to the offices of state so that smart commoners like themselves could rise up in service to the king.

Jesuit missionaries to China such as Matteo Ricci wrote home to commend the Chinese meritocratic civil service exams for hiring the best bureaucrats. Voltaire, the epitome of the early Enlightenment, read the Jesuits and frequently recommended China as his beau idéal of deist moderation.

Joseph II, enlightened despot of Austria, saw China’s combination of hereditary monarchy served by expert bureaucrats as a template for his desire to evict the nobility from administration of his empire without endangering his own throne. He helped make Austria one of the best-run states in Europe.

But as the calm early Enlightenment faded in appeal as Rousseau introduced more agitating speculations, India began to excite the imagination of Europe’s men of the right. In their defense of the hereditary class privileges of European aristocrats, their admiration turned to the most hereditary society imaginable, the Hindu.