A Trayvon by any Other Name 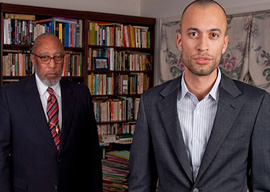 The first time I saw the name “Trayvon Martin” was on March 16 while reading an arguable but intelligent New York Times op-ed. Entitled “As Black As We Wish to Be,” it was by Thomas Chatterton Williams, who authored Losing My Cool: How a Father’s Love and 15,000 Books Beat Hip-hop Culture.

Out of the corner of my eye while reading Williams’s essay, I saw a link entitled “Charles M. Blow: Trayvon Martin.” My immediate thought was, “Oh, good, Trayvon sounds like a black name. This must be about another intelligent African-American writing or doing something interesting.”

But my brain answered back: “Nope, it’s about a Trayvon, not a Thomas Chatterton. It’s not on the sports page, so it’s going to be messed-up and miserable. And because it’s in the Times, not the Post, Trayvon’s going to be the victim, not the victimizer.”

“The win-win solution against stereotyping is for blacks to stop living down to their profiles.”

Was that stereotyping? No doubt.

For days we were deluged with pronouncements about the evils of noticing patterns, of how white racist George Zimmerman had hunted down Trayvon solely because he stereotyped him, of how Bayesianism is tantamount to child murder.

Then it began to emerge that the real story was more ambiguous. Zimmerman turned out to be a mestizo (which is apparently an ethnicity too shameful for the press to mention). The tale slowly morphed into a dismal cross between The Bonfire of the Vanities and Paul Blart: Mall Cop.

Trayvon had tried to fit the stereotype of young black males aspiring to the thug life, picking a Twitter handle based on a rap song featuring convicted killer C-Murder. Just as Zimmerman had worried, Trayvon likely had dabbled in burglary: Martin was nabbed at his high school last fall with a backpack containing women’s jewelry and a screwdriver.

The win-win solution against stereotyping is for blacks to stop living down to their profiles.

So what can grownups do to discourage black youths from acting like knuckleheads?