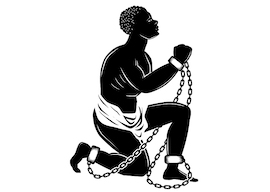 What would U.S. history have been like without slavery?

As I mentioned last week, The New York Times has become obsessed with what it portrays as America’s mounting slavery crisis, with its use of the word “slavery” quadrupling in its columns over the half-dozen years of the Great Awokening.

The Times’ 1619 project to portray blacks as the very foundation of America affords us an opportunity to imagine an alternative America that had resisted the temptations of importing Africans.

Would the U.S. have been impoverished without blacks, as the 1619 spin implies?

Slavery was certainly an important part of the 18th- and 19th-century economy, so much so that it led to the great crisis of the Civil War. But it’s worth contemplating an America without slaves.

The northern United States was attractive to subsistence farmers looking for cheap land. But there wasn’t all that much worth exporting to Europeans at similar latitudes other than lumber. The British Isles could grow wheat and even that exotic Peruvian import, the potato. Before the steamship and the removal of British tariffs in 1846, exporting grain across the Atlantic was a modest business.

But Britain couldn’t grow several warm-weather crops, most famously, tobacco, cotton, and sugar. Hence, exporting these across the Atlantic could pay.

Blacks were quite useful in raising these crops because Africans were genetically better adapted to resisting hot-country diseases. South of Virginia, mortality rates were higher for whites than for blacks. Plantation owners in the South were averse to paying white workingmen a fair wage to compensate for the health risks they took on.

Conversely, slavery fizzled out in the cold North in part due to blacks dying at such a high rate—twice that of whites in Massachusetts—that slavery was less profitable there. Historian David Hackett Fischer wrote in Albion’s Seed:

So high was mortality among African immigrants in New England that race slavery was not viable on a large scale, despite many attempts to introduce it. Slavery was not impossible in this region, but the human and material costs were higher than many wished to pay.

We still aren’t fully aware of the specifics of why blacks tended to be healthier than whites in the South, but at least four warm-climate ailments deserve attention.

Almost all West Africans possessed the Duffy negative gene variant that improves resistance to debilitating vivax malaria, which was common in the South. As German scientist Johann David Shoepf observed in the 18th century, “Carolina was in the spring a paradise, in the summer a hell, and in the autumn a hospital.”

“It’s worth contemplating an America without slaves.”

Similarly, a sizable fraction of West Africans had one copy of the sickle cell mutation that offered resistance to the lethal falciparum malaria sometimes found in the hottest places in the South.

Blacks likely had some genetic resistance as well to the African disease of yellow fever, which tended to strike American cities in summer, discouraging urbanization in the South. During yellow fever epidemics, whites were several times more likely to die than blacks.

And Africans might have had a measure of resistance to hookworm, a parasite that induced anemia among the barefooted. In the early 20th century, the Rockefeller Foundation carried out a successful crusade against hookworm in the South, where 40 percent of the population had been infected.

My guess is that the tobacco industry in Virginia and North Carolina would still have been profitable paying a market wage for free white labor.

Ironically, tobacco plantations were probably healthier for their workers than for their customers. Tobacco growing was among the less exhausting forms of farmwork, and cigar rolling while listening to your hired reader declaim from books and newspapers was a fine job.

Until recently, the black population grew much faster in the United States than at home in Africa, in other New World countries, or, especially, in the Middle East (where castration of slaves was common).

The U.S. was the most distant destination of the Atlantic slave trade, so transportation costs were highest. Hence, it was economically rational to treat slaves well and encourage their family life.

Judging from the spectacular growth of the black population from about 400,000 imported slaves to 41 million today, American slave-owners tended to treat their property fairly carefully.

Leaving aside post-1865 black immigrants and assuming the typical self-identifying African-American today is about four-fifths black by ancestry, the average slave who landed in the U.S. now has about the equivalent of 75 full-blooded black descendants in this country.

In contrast, in destinations closer to West Africa, sugar plantation owners frequently worked their slaves to a quick death and replaced them with cheap imports. For example, at least 600,000 slaves were brought to the sugar island of Jamaica. But the country’s population today is under 3 million, implying a growth factor (ignoring emigration) of only about five times, or one-fifteenth the 75X population increase enjoyed by blacks in the U.S.

It seems unlikely that free white labor could have economically grown sugar in the U.S., but so what? Only a small part of the mainland north of lightly populated Florida was suitable for sugar growing.

In between tobacco and sugar in terms of latitude and burden on the workers fell cotton.

During the cotton bubble of the 1850s, it became vastly profitable to grow, which led to the explosion of pro-slavery ideological extremism in the South that fueled secessionism. (Before cotton became so lucrative, slave owners had tended to be slightly sheepish about their Peculiar Institution.)

But when the Confederacy, assuming “Cotton is King,” announced its misguided embargo on cotton exports to encourage London to intervene on its side, it was quickly discovered that cotton was easy to grow in other hot places like India, Egypt, and Brazil. The American cotton business was never again the gold mine it had been before the Civil War.

Without slavery, cotton barons would have had to pay whites a lot to work in the cotton fields. But it sure seems as if in the long run paying an honest wage would have been a good deal.

Granted, an America without slavery would not have developed the lowland Deep South as rapidly as it did, much as Florida south of the panhandle was largely empty until the 20th century. For example, Miami was not incorporated until 1896, at which point it was estimated that only 1,800 souls resided in the area. In 1900, barely a half million people lived in the entire state of Florida, compared with 21 million today.

And yet, the failure of Americans to do much with the bulk of the Florida peninsula until the 20th century does not loom depressingly in contemporary thinking.

Similarly, if the cotton belt centered on Mississippi and Alabama had taken a few more generations to develop due to the requirement to either pay free white workers high enough wages or to develop better technology that could do without them, I doubt if Americans in our alternative 2019 would lament this history any more than Americans today mourn all the oranges that weren’t grown in Florida in the 19th century.

The political implications of no slavery would have been profound.

Without slavery, there would have been much less to fight over, so no catastrophic Civil War. (The latest estimate is it killed 750,000 Americans.)

Plus, the Southern states would have been politically dominated by uplanders rather than by lowland plantation patricians, e.g., more nationalists like Andrew Jackson and Sam Houston and fewer secessionists like John C. Calhoun and Jefferson Davis, so secession over lesser questions like tariffs would have been unlikely.

After the Southern states walked out of Congress in 1861, the Republicans passed a package of measures that had long been blocked by Southern planter power, such as a high tariff to protect infant industries, internal improvements including the transcontinental railroad, land grant universities, and free land for homesteaders. Without a slave economy, Southern politicians would have been less opposed to these productive measures and would instead have bargained to get their fair share.

And without slavery to impose an aristocratic tone on Southern society, mechanically ingenious southrons would likely have made better use of their abundant natural resources, such as waterpower. In our world, unfortunately, although the South had the tallest mountains in the eastern United States, it developed far fewer water-powered mills than did the North. Physicist Gregory Cochran estimates that by 1840 the enterprising North enjoyed about eight times as much horsepower from water wheels as the South possessed in slaves.

After the Civil War, the former slave regions went through a long economic and psychological depression, perhaps until WWII and air conditioning revived the region. In contrast, Texas (at least the majority of the state west of where the cotton belt petered out) boomed.

Without slavery, the economic culture of the Southeast in late 19th and early 20th centuries would have been less patrician, less downcast, much less obsessed by race, and more like Texas: brash, optimistic, and dynamic.

Australia, the Lucky Country, provides another model for how people from the British Isles could build a prosperous country in a warm climate without slavery (other than their shameful use of slaves in the sugar industry).

Granted, Australian history is strikingly lacking in drama: One history book I read emphasized that Australia’s great contribution to human happiness has been the invention of the two-day weekend. But having Saturday as well as Sunday off is a good thing, the kind of innovation you devise when you don’t have many workers so you have to make life better for them.

All in all, an America without slaves sounds like an improvement.