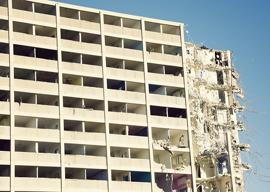 What if the world isn’t about to blow up? What if most everything is slowly getting better and better? Would there be nothing to worry about then?

The new book by Harvard cognitive scientist Steven Pinker, Enlightenment Now: The Case for Reason, Science, Humanism, and Progress, documents, using 75 well-crafted graphs, how life has gotten better in a host of realms.

Pinker is perhaps the finest public intellectual of our time, yet his prose style remains immensely accessible. (I detect hints of Dave Barry.)

This trend didn’t happen automatically or effortlessly. Guys like my father, an engineer at Lockheed from the 1930s to the 1980s, put a lot of sweat into making planes safer. And when they failed, they had to walk the crash sites picking up broken pieces of the plane (and of the passengers).

Fortunately, we don’t have too many vested interests on the side of airplane crashes. Even so, it took until 1975 for Congress to make the National Transportation Safety Board independent of the Department of Transportation so that its reviews of each plane crash were not fettered by the need to cover up politically embarrassing mistakes.

In contrast, the recent school shooting in Broward County by a blatantly scary youth who should have had a record a mile long followed a half-dozen-year-long scheme among local and Obama Administration officials to reduce arrests of black and Hispanic teens in the name of racial and ethnic equality. Unlike with plane crashes, there remains intense political pressure to keep this history hushed up, even though Broward officials had boasted about their plan in the past.

“Saving the world from African overpopulation is eminently doable, but it does require the courage to mention in polite society that it’s a problem.”

Similarly, we still don’t have a National Immigration Safety Board to objectively investigate how to make our immigration system less of a crapshoot.

Nor do we have a system of immigration insurance requiring immigrants to purchase insurance against the risks they impose upon Americans. This would create financial incentives against filling up the country with needless risks.

Unfortunately, thinking rationally about immigration policy Is Not Who We Are. (For example, Pinker’s massive book extolling rationality only refers to immigration or immigrants on seven pages, with the most extended treatment of the topic being “Cuisines introduced by, 259–60.”)

As you may have noticed from the news, one thing that does seem to be getting worse is mass shootings by more or less suicidal gunmen, which really wasn’t a Thing in the popular mind until the U. of Texas tower shooting in 1966. The first modern K–12 school shooting with random victims would appear to have been committed by a 16-year-old girl in San Diego in 1979 who explained, “I don’t like Mondays.” If that had not been immediately turned into a hit song by the Boomtown Rats, perhaps school shootings wouldn’t have become a copycatted concept?

Why have there seemingly been more suicide killers in recent decades? Perhaps the jihadis think they’ll go to heaven for killing infidels and the ex-Christians don’t fear going to hell anymore.

But this trend doesn’t fit within Pinker’s optimistic secularist worldview, so it doesn’t get much attention in Enlightenment Now other than to dismiss it as statistically little more significant than death by beestings or lightning strikes.

And even lightning strikes are not much of a danger anymore:

Yes, thanks to urbanization and to advances in weather prediction, safety education, medical treatment, and electrical systems, there has been a thirty-seven-fold decline since the turn of the 20th century in the chance that an American will be killed by a bolt of lightning.

A journalist recently asked me if I thought we were doomed.

Most people who take an interest in public affairs feel that things can’t possibly go on much longer like they are now, and thus the end is nigh. But, like Pinker, I’m rather blithe by personality, so I said, “Probably not. Most likely, things will get better.”

For example, our standard of living has been carried along for half a century by the beneficent power of Moore’s Law, the rapid doubling of computer power. But now, just as Moore’s Law seems to be petering out, we suddenly have a lot of oil and natural gas, with U.S. oil output doubling over the past dozen years due to unexpected technological advances by the energy industry.

This is not to say that this good luck will continue indefinitely or that something very bad won’t happen sooner or later. Whatever it is will likely come as a big surprise to me, however.

On the other hand, I have been pointing out for some time that one huge problem obviously facing the world is the staggering population growth of sub-Saharan Africa.

As recently as 2004, the United Nations demographers made a Pinkerian assumption that black Africa’s population would reach only 2 billion by the end of this century. But as the U.N. looked more into the question, it realized that Africa was not undergoing the “demographic transition” to low fertility anywhere near as rapidly as the rest of the world. Thus, the U.N. has issued ever-increasing forecasts for sub-Saharan population in this decade, with the 2017 estimate being over 4 billion.

This probably isn’t the end of the world, it’s just depressing. The mid-20th-century “Great Migration” from the American South numbered only 6 or 7 million, but it still destroyed Detroit. The much greater migration heading from Africa to Europe will likely do far worse. The cities of Europe that survived the Second World War are probably the greatest works of arts of humanity, but, under present trends, they are going to be inundated by immigrant Africans, turning Florence into Ferguson, Barcelona into Baltimore, and Edinburgh into East St. Louis.

There’s little need for this impending destruction. Africa is a vast continent with, as Pinker suggests, plenty of room to grow far more food than it does now. But Africans are a threat to overwhelm Europe (and, eventually, the rest of the Western world) because our culture is increasingly sacralizing blacks, with the worst sin being to speak realistically of their strengths and weaknesses.

This doesn’t have to happen. Non-African Third World countries, even Bangladesh, have largely started to get their fertility under control. And civilized countries such as Japan, Israel, and Hungary have demonstrated that protecting their borders from migrants is merely a matter of political will.

Saving the world from African overpopulation is eminently doable, but it does require the courage to mention in polite society that it’s a problem. (Pinker doesn’t show much appetite for this challenge.)

But leaving the African population bomb aside, I was asked, “If you don’t think we are necessarily battling apocalyptic problems, why do you care?” The Pinkerian perspective that things are getting better all the time might suggest that there’s no reason to take a stand.

I have two reasons, though, for caring about politics even if life might continue to get slightly better for the average American even without the kind of heresies I’ve helped inject into the political process.

The first reason is what economists might call opportunity cost: the potential gains from making an even better choice. Just because you are doing okay doesn’t mean Americans couldn’t do better.