Busing: That Little Jew Was Me 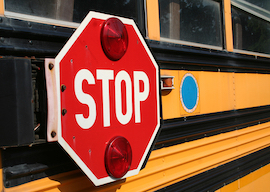 “That little girl was me,” declared mocha madwoman Kamala Harris during the first debate of the Kallikak Party candidates, as she “devastated” Joe Biden by making the killer point that she’d been among the first of her kind in her city to “integrate” a school via busing. As a service to my millennial and Mennonite readers (plus the one or two of you raised in a rape dungeon by your creepy uncle), mandatory school busing was an attempt to racially “balance” public schools by shipping white kids to black schools and black kids to white ones. The resulting racial harmony was supposed to usher in a utopia…an “Age of Blaquarius,” if you will.

Biden, back in the days before his brush with a cancerous tumor (by which I mean Obama), was vehemently anti-busing. As was I, because in 1978, the bus was a-comin’ for me.

My parents bought a house in a quaint little L.A. Westside neighborhood specifically because there was a school nearby. I’ve always despised mornings, and my mom knew that the best way to get me to go to school hassle-free was if I could sleep in as late as possible each morning.

A school a half block from the house was perfect.

But during my fifth-grade year, the school district told me I’d have to get up 90 minutes early to catch the bus to the intersection of Dolemite and Sweetback. No fucking way, and I’m pretty sure I said that exact sentence to my mom. My reluctance wasn’t racial. As I often mention in this column, I attended majority black junior high and high schools, while my candy-ass white friends opted out for private ones. But damned if I was gonna wake up at 5:30 a.m. five days a week because Shmuely Zipfelschitz of the ACLU got a court order. Not with a perfectly fine school a half block away.

So I told my parents, let’s find a private school as close as possible. That’s literally how we chose it—distance. The school’s academic record was irrelevant. The Newbridge Academy for Pampered Rich Douchebags (I may be remembering the name wrong) was where I spent the second semester of fifth grade.

I hated it—it was pretentious, Jewy, and the kids called the teachers by their first names (even the principal was “Mike”). But I got to sleep in, so I stayed.

I have several black friends my age who were bused that same year. Cleve is one of them. He’s a “civilian” with a normal life who’d prefer his real name not be used. But if his name is fake, his story isn’t.

“Assaults, ostracism, and anti-intellectualism. Such were the joys of Kamala Harris’ beloved forced busing.”

Cleve also had a school a block away from his home…an entirely black school. So the courts said, “Go north, youngblood,” and he did. Cleve’s experience was positive. Academically, he noticed little difference between the new school and the old one. Clean white public school or drab black public school, the teachers were the same UTLA automatons. If you’re serving slop from a filthy trough, does it matter if it’s served on a paper plate or a silver platter?

Those were the days before computers. So what difference did the school’s wealth make? Every public school used the same books and the same desks and chairs. But Cleve benefited in one key way…socially. He made some very good friends among the white students, and, most important, he got made fun of less. Cleve is dark-skinned and thick-lipped. He’s the French roast to Kamala Harris’ caramel mocha. And in his all-black school, he’d been ridiculed mercilessly for his looks. But at the new school, Cleve soon realized that the white kids didn’t give a damn about skin tone or lips. The daily abuse he got at the black school suddenly…ended. So I don’t blame him for having good memories of busing.

What Cleve dreaded every day was not the “racism” of white students (he found none of that), but the bus rides. An hour-plus each way of unsupervised hell. That’s when the teasing and abuse were at their worst. And this problem was actually foreseen by one of busing’s most influential advocates. John A. Finger was a liberal New England professor (of course) who served as the NAACP’s busing counsel, and the court-appointed busing “expert” in over a dozen court cases in the 1970s. Indeed, in cities like Denver, Boston, Charlotte, and Oklahoma City, the busing schemes were called “the Finger Plan.”

In April 1974, in his report to Judge William Doyle of the U.S. Court of Appeals, Tenth Circuit, Finger offered the following rosy defense of his scheme:

Despite the widespread opposition to busing, there is no evidence that it hurts anybody. The facts are that many children enjoy it. Others view it as just a thing one does like driving to work in one’s car. One just does it. Some children don’t like it, but that usually is because the bus is unsupervised and the children are teased or assaulted.

“There is no evidence that it hurts anybody.” Except for those “assaults” on the bus. “Some children” apparently don’t like being assaulted.

Busing inflicted psychological as well as physical harm on black children. Author and producer Tanner Colby (The Daily Show With Trevor Noah) detailed this harm in his Andrew Carnegie Medal-nominated book, Some of My Best Friends Are Black: The Strange Story of Integration in America:

Before desegregation, “acting white” was a phrase no one had ever heard with regard to school involvement or academics. Yet in the wake of busing, it rose to become one of the most hurtful insults one black student could level at another. Talking white, dressing white, being enthusiastic about anything “white” was forsaking one’s own.

Colby highlights the case of one high-performing black student who was bused along with his peers to a white school:

I was discriminated against more by people of my own color than I ever was by white people…. I can’t actually pinpoint an incident where a white person ever called me a nigger. I’m sure it happened, but I can’t say it was any one time. The black kids were harsher. They would say stuff to my face.

Dr. Beverly Tatum, president of historically black Spelman College, expanded on this topic in her book Why Are All the Black Kids Sitting Together in the Cafeteria?

In a school with a lot of racial tension, Terri [a black student] felt that “the worst thing that happened” was the rejection she experienced from the other black children who were being bused to her school. Though she wanted to be friends with them, they teased her, calling her an “Oreo cookie” and sometimes beating her up.

When will these stupid kids stop bitching about a few measly assaults?

An article in the South Florida Sun-Sentinel also explores this unique gift that busing bestowed upon the black community:

[According to] Kitty Oliver, black author and writer-in-residence at Florida Atlantic University, there was a time when black students wouldn’t dare tease a student, but rather would applaud them for their achievements…. But desegregation created a clearer division of white and black. Once black and white students started attending school together, the association shifted and black students began to tease one another by pushing their smart peers into the “white” category.

In a landmark desegregation study by the late Nigerian-American anthropologist and professor Dr. John Ogbu, the author recounts an interview with a bused black student who told his school counselor why he plays dumb around his black friends: “I don’t want ’em to know I’m smart. They’ll make fun of me. I won’t have any friends. Where I live, they’re gonna say I’m white.”

Assaults, ostracism, and anti-intellectualism. Such were the joys of Kamala Harris’ beloved forced busing. Yet some black kids like Cleve still say they benefited from the experience overall.

In April 1974, Professor Lawrence G. Felice of Baylor University presented a paper at the annual meeting of the American Educational Research Association. Felice was at the conference representing the National Center for Educational Research and Development (U.S. Department of Health, Education, and Welfare). His paper was titled “Busing, Desegregation and Student Self-Concept.”

Felice found that bused students had lower academic achievement levels than non-bused students, but not to a dramatic degree. Among bused black students, Felice found a solid “meh” regarding enthusiasm for the program: “37% liked the new school better; 34% liked their new school about the same; and 29% liked their new school less.” Regarding busing in general, 24% of black students were favorable, 37% neutral, and 39% unfavorable. When the reasons for the unfavorable reactions were broken down, the biggest one (51%) had to do with the bus rides (exhaust fumes, time on the road, and negative experiences during transit). Only 6% of black students cited “racism” from white students as a problem.

Sounds like as good an argument for school choice as anything Betsy DeVos has ever said. What it isn’t is an argument for quota-based forced busing…for importing smart black kids along with their tormentors who fare poorly academically in a new school they don’t want to attend.

Not that any of this matters anymore. Here in L.A., white flight and Mexican immigration rendered the debate moot. There are so few remaining “white” LAUSD schools, there’s no way to do the 50/50 exchanges that were tried in the ’70s. Steve Sailer pointed that out last week, but it’s important to stress just how quickly mandatory busing depleted the district of its white stock. When I tell people I went to majority black junior high and high schools, they ask, “You lived in Watts? Compton?” Nope. My high school was supposed to draw evenly from the Westside (where I lived) and southeast of the Westside (blacktown in the early 1980s). But by the time I started high school in 1983, my public school, formerly mixed, was now 85% black.

In my neck of the woods, forced busing started in 1978. By 1983 the white kids were gone. That’s a fast demographic change. Busing screwed things up quickly and irretrievably.

Busing may be done with me, but I ain’t done with it. In part 2 next week, I’ll explain why the origin of L.A.’s busing debacle tells us everything we need to know about the development of today’s SJW culture, and I’ll detail the surprising role Mexicans played as the primarily Jewish social engineers played a game of chess in which the pieces were only black and white, but never brown.