Down on The Duke 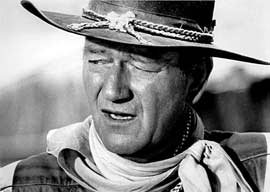 Last week California lawmakers shot down a proposal to declare May 26th “John Wayne Day” in honor of the iconic actor’s birthday. At issue were comments that “The Duke” had made in a May 1971 interview with Playboy. At the time of the interview, Wayne was reputedly the highest-grossing actor in Hollywood history.

In an interview that seems delightfully caustic due to the two generations of Sensitivity Creep that have unspooled in the interim, Wayne refers to Midnight Cowboy as “a story about two fags,” contrasts his “personal rebellion against the monotony of life” against the hippie generation’s “dissension by rote,” and slams Herbert Marcuse in favor of Spiro Agnew.

But it was his comments about blacks and Injuns that put the kibosh on the proposed John Wayne Day. Regarding blacks, Wayne said:

With a lot of blacks, there’s quite a bit of resentment along with their dissent, and possibly rightfully so. But we can’t all of a sudden get down on our knees and turn everything over to the leadership of the blacks. I believe in white supremacy until the blacks are educated to a point of responsibility. I don’t believe in giving authority and positions of leadership and judgment to irresponsible people.

Regarding what were then known as “American Indians” but are now referred to as “Native Americans,” Wayne said:

I don’t feel we did wrong in taking this great country away from them, if that’s what you’re asking. Our so-called stealing of this country from them was just a matter of survival. There were great numbers of people who needed new land, and the Indians were selfishly trying to keep it for themselves.

Hoo-doggy! Clearly problematic and unacceptable! Opponents also cited Wayne’s support for the John Birch Society and the House Un-American Activities Committee as reasons for why he should be consigned to the rusty historical dustbin of Dead White Males where he must languish, condemned and unforgiven, from here to eternity. It matters not that he was once considered so important that Joseph Stalin considered assassinating him and Hirohito requested a personal audience with him when first visiting America in 1975″according to the modern secular catechism, John Wayne had committed unpardonable sins.

After the John Wayne Day proposal was nixed by a vote of 35-20, Republican State Assemblyman Matthew Harper”the author of the resolution” issued the following comments in a press release:

Today is the day that political correctness prevailed over a profoundly American figure recognized throughout the world. Opposing the John Wayne Day resolution is like opposing apple pie, fireworks, baseball, the Free Enterprise system and the Fourth of July!

Over the arc of my life I’ve seen John Wayne transform from an emblem of everything that’s good about America to a symbol of everything that’s wrong with it. In the year I was born, the six top-rated TV shows in America were, in order, Gunsmoke, Wagon Train, The Andy Griffith Show, Have Gun”Will Travel, The Real McCoys, and Rawhide. In other words, two of those shows were loving and benign portraits of poor white Southerners, while the other four were Westerns.

This was 1961, mind you, back when conquering the American West was still viewed as a matter of pride rather than shame. It was when there still seemed to be new places to conquer rather than conquered territories from which to humbly retreat. The mood was one of expansion rather than contraction.

But ten years later, at the time of John Wayne’s now-infamous Playboy interview, the world’s Herbert Marcuses had already made tremendous headway in twisting the dominant American narrative away from one of pride to one of guilt”or, even weirder, of taking a perverse sort of pride in making huge public displays of one’s guilt.

By my late teens, cowboys were something to despise rather than emulate, and I owned records by The Clash and the Gang of Four“English punk bands who were both openly Marxist”whose album covers depicted the cowboy as the bad guy. The narrative had shifted violently from that of my early childhood, where American pop culture was obsessed with “Cowboys and Indians” but the cowboys were always the good guys.