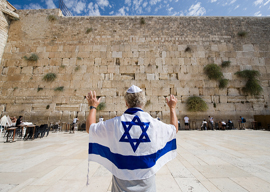 Jonathan Weisman, a mid-level New York Times staffer and author of the short but repetitious new book (((Semitism))): Being Jewish in America in the Age of Trump, is not a particularly acute thinker. But his unoriginality makes his (((Semitism))) a revealing distillation of the conventional wisdom of 2018.

Weisman first ran into Jewish trouble in the summer of 2015 when, as a supporter of President Obama’s Iran deal (now back in the news), he coauthored a New York Times article noticing which kinds of Democrats in Congress were most likely to break ranks with Obama. According to a table Weisman had a graphic artist draw up, many of the Democrats opposing Obama on Iran were, unsurprisingly, Jewish, such as Chuck Schumer (D-Wall Street), and many of the rest represented heavily Jewish districts, such as Ted Lieu (D-Beverly Hills).

For publishing this act of pattern recognition in a mainstream rather than an ethnic publication, Weisman was scorched by more powerful Jews than himself. The Simon Wiesenthal Center called his count “grotesque,” complaining that Weisman’s infographic validated stereotypes about “Jewish money” and “Jewish pressure” having disproportionate influence over American foreign policy.

Jonathan Greenblatt, boss of the Anti-Defamation League, labeled Weisman’s chart “offensive” and said that it “reinforces stereotypes about American Jews and dual loyalty.”

Jeffrey Goldberg, who has since been promoted to editor in chief of The Atlantic, scoffed that it “would be helpful if the Times would also tell us just how Jewish each Jewish member of Congress is.”

Goldberg’s Atlantic, of course, runs countless articles attempting to quantify the horrors of White Privilege with little of this kind of obscurantist quibbling over how white whites are (although Goldberg’s main man Ta-Nehisi Coates sneers that whites are “people who believe they are white,” while the rest of his staffers pretend not to notice Coates’ embarrassing fixation).

But counting Jews is not acceptable.

“America’s main problem today is that there is too much hate in the hearts of white people…hatred of other white people.”

The New York Times crumbled under the Jewish assault and deleted from its archives the column in the table mentioning whether the anti–Iran Deal Democrats were Jewish, apologizing:

Many readers and commenters on social media found that aspect of the chart insensitive. ‘Times’ editors agreed and decided to revise it to remove the column specifying which opponents were Jewish.

To be precise, enumerating Jews is not allowed in a critical or neutral context, such as Weisman’s 2015 Iran Deal article. It’s fine to celebrate Jewish contributions, but don’t mention the Jewish role in an objective manner.

One reason is that in an era obsessed with rooting out “systemic racism” via white-counting, Jews tend to be numerically overrepresented in most of the better sorts of jobs (as the Weinstein #MeToo scandals have demonstrated).

On the other hand, the percentage of Jews in Congress has been falling in recent years. With Al Franken getting #MeToo’d on rather tenuous charges, the Senate is down to eight Jewish members (only four times their share of the national population). In politics, diversity is beginning to take a toll on Jewish numbers, with, for instance, my old Representative Howard Berman being forced out of office after thirty years by the belated creation of a Mexican district.

In Weisman’s book, he doesn’t get around to mentioning this precipitating brouhaha over his Iran Deal table until after 68 pages of the usual stuff about the anti-Semitic dangers posed by David Duke, Richard Spencer, and Pepe the Frog.

While Jews tend to pride themselves on being intellectually fractious—“Ask two Jews, get three opinions”—their survival as a nation for thousands of years is a testament to their impressive penchant for defusing internal disputes by picking fights with external enemies.

For example, Henry Kissinger observed with understated exasperation in the 1970s that Israeli foreign policy is largely a by-product of Israeli domestic politics. But 45 years later, the success of this tendency cannot be denied. You’ll note that while Israel’s neighbors Syria and Lebanon have suffered unbelievably horrible civil wars of all against all, Israel has remained relatively united at home and, not coincidentally, antagonistic abroad.

In the U.S., intra-Jewish hostilities tend to get transmuted into critiques of society as a whole. In the post-War era, for instance, many high-IQ young Jewish women chafed under their parents investing more lavishly in the education of their brothers. A Jewish comedienne joked that at gatherings of aging Jewish mothers, the second-favorite boast, after “My son the doctor,” was “My daughter drove me.”

Not surprisingly, bright Jewish women such as Betty Friedan, Shulamith Firestone, Rosalyn Baxandall, Susan Brownmiller, Ruth Bader Ginsburg, Bella Abzug, and Andrea Dworkin tended to be the leaders in the feminist revolution of a half century ago. Also not surprisingly, however, their intra-Jewish resentments of their parents’ Jewish patriarchalism have largely been hushed up, with men or society in general being blamed instead.

Likewise, many 21st-century American Jews nurture resentments of how an ancestor was turned down for membership at a ritzy country club for being an unrefined Jew from Eastern Europe, but have conveniently forgotten that great-grandpa wasn’t trying to join a WASP golf club, he was instead blackballed by a German Jewish golf club.

Similarly, Weisman, three years after being put through the wringer by his fellow Jews over his Iran chart, has now published a book calling on American Jews to stop squabbling over Iran and instead unite again the real enemy: Donald Trump.

Weisman begins his book not with his 2015 lambasting by other Jews, but with him tweeting in 2016 a Robert Kagan op-ed about the dangers of Trumpian fascism. (Weisman doesn’t mention the irony that Kagan’s wife, diplomat Victoria Nuland, played a sizable role in the 2014 violent overthrow of Ukraine’s elected government, with far-right ultras leading the putsch.)

He was shocked to receive replies putting his name and Kagan’s name in triple parentheses to point out their Jewishness. While endless clickbait articles are churned out on topics like #OscarsSoWhite theorizing that white overrepresentation in good jobs can only be explained by a vast racist conspiracy among white people, the similar overrepresentation of Jews relative to gentiles is simply not discussed in polite society. White Privilege is currently an American mania, but the analogous concept of Jewish Privilege barely exists.

Yet, journalists made a tactical mistake by getting themselves invested in Twitter, which then turned out to have a fairly level playing field where insults could be exchanged without the institutional advantages provided by more traditional media. The Twitter methodology encouraged users to point out publicly the apparent disparate impact discrimination that led to Jews being extremely overrepresented in opinion media (especially in articles denouncing whites for disparate impact discrimination).