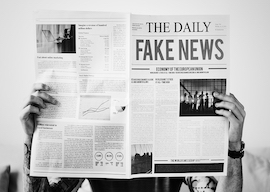 Imagine if an award-winning American journalist had spent three weeks in Eastern Germany and written a feature article about secret bunkers where neo-Nazis were training to usher in a Fourth Reich.

I think most Americans would believe it, and even if the story turned out to be entirely fabricated, I doubt that the writer would have been terminated and thoroughly disgraced. Most Americans have been awash in so much WWII propaganda by the victor, they probably wouldn’t care whether the article was true or not, because it makes them feel good.

A recent scandal suggests that the German media is more honest than its American counterpart. Award-winning German alleged reporter Claas Relotius—he was named CNN’s Journalist of the Year in 2014—has just been unmasked as a rank fabulist after it was revealed that he fabricated large sections of at least 14 articles since 2011—most significantly, a 2017 piece about Trump voters in rural Minnesota that turns out to have been a largely fact-free hit piece designed to appeal to the confirmation bias of media elites who regard rural white Americans as hateful, toothless retardates.

The article appeared in Der Spiegel—one of Europe’s highest-circulation and most respected publications. With a fact-checking staff of 70, this saga is being depicted as Europe’s biggest media scandal since 1983’s “Hitler Diaries” debacle.

Relotius, 33, was first unmasked by coworker Juan Moreno, who smelled something fishy when he started double-checking many of the assertions in Relotius’s 60 published articles for Der Spiegel. When Moreno brought his evidence to higher-ups, they initially accused him of lying, and Relotius was almost successful in having him fired. But faced with mounting evidence that Relotius lies as easily as he breathes, he finally caved last Monday and admitted that he was essentially a fiction writer appealing to the progressive mindset.

The Hillbilly Trumper article, “Where they pray for Trump on Sundays,” aimed its gun barrel at the town of Fergus Falls, Minnesota, where a self-described liberal couple did a bang-up job fact-checking the article’s seemingly endless mistakes and fabrications. In a shimmering example of independent journalism called “Der Spiegel Journalist Messed With the Wrong Town,” Michele Anderson and Jake Krohn say they are “wary about the anthropological gaze on rural America in the wake of the 2016 elections…when before we really didn’t matter to mass media at all.”

“Most Americans probably wouldn’t care whether the article was true or not, because it makes them feel good.”

There are only two things those writers seem to have concluded or are able to pitch to their editors — we are either backwards, living in the past and have our heads up our asses, or we’re like dumb, endearing animals that just need a little attention in order to keep us from eating the rest of the world alive….Not only did Relotius’s “exposé” on Fergus Falls make unrecognizable movie-like characters out of the people in my town that I interact with on a daily basis, but its very basic lack of truth and its bizarrely bleak portrayal of the place I love left a very sick, unsettled feeling in the pit of my stomach.

Regarding the article’s truth-to-fiction ratio, they claim that:

In 7,300 words he really only got our town’s population and average annual temperature correct, and a few other basic things, like the names of businesses and public figures, things that a child could figure out in a Google search.

Among the article’s innumerable mistruths:

• Alleging that City Adminstrator Andrew Bremseth had never seen the ocean, and “was never together with a woman,” Anderson and Krohn present a picture of Bremseth and his live-in girlfriend of many years posing for a selfie in front of the ocean. After interviewing Bremseth, he claims he never said that Trump would “kick ass” and was neither a fan of the New England Patriots nor 18th century French philosophers as the article had alleged.

• Claiming that the Clint Eastwood patriot-fest American Sniper had been playing nonstop in Fergus Falls for two years. A simple email to the local cinema’s owner confirmed that the film had played only a little over a month in 2015.

• Stating that a woman named Maria Rodriguez was a local restaurant owner who “saw Trump as a savior” despite the fact that her high-school aged son Israel was bullied for being Mexican by locals. The son in question, who posed for a picture and was identified as Israel Rodriguez in a photo caption under the article, is actually a college student named Pablo. He says Roletius never interviewed him and had merely asked him to pose for a snapshot. And Pablo said that students in high school never bullied him for being Mexican.

• Claiming that anyone who wishes to enter the local high school “must pass through a security line, through three armored glass doors, and a weapon scanner.” In the real world, there is no weapon scanner and only two doors—neither of which can be properly described as “armored”—and only because two doors are needed to keep the blistering Minnesota winters at bay.

• Averring that the town hosts a “Western Evening” where everyone, even the token local Mexican female, dance in “old-fashioned clothes” and wear “hats and cowboy boots.” No such event exists.

Sadly, in the end, the couple reveal their own biases by stating that the majority of their “friends, family and neighbors voted against their own interests in 2016.” It seems as if they couldn’t resist the impulse—one they apparently share with Claas Relotius—to depict their town’s inhabitants as cretinous Cro-Magnons.

But I’ll take whatever journalistic victories we can get these days. A pair of non-journalists from Podunk, USA did far better journalism than CNN’s 2014 Journalist of the Year.

I’ve often wondered why the egregious silencing of any media figure who doesn’t think like Claas Relotious ever since Trump was elected hasn’t become the biggest media news story of the past two years. After all, in previous generations, I would think that muting around half of the nation’s citizens would be a Watergate-level scandal. It was only recently that an online commenter explained the reason: It’s because independent journalists are the mainstream media’s competition, which is why they remain silent on all this silencing.