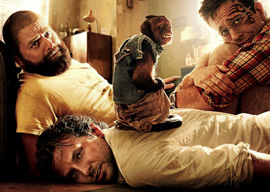 Although future behavioral taboos are notoriously hard to predict, it’s clear that within this decade America will end the use of chimpanzees in entertainment. I’ll go much further out on a limb and also predict that within a generation, and for much the same reasons, we will seriously consider banning child stars.

The year 2011 marked a watershed in American attitudes toward employing chimpanzees. When I was a kid in the 1960s, chimps were fashionable, associated in the popular mind with the space program and the promise of the new Africa. Plus, young ones are extremely entertaining.

With chimps, though, the older they get, the cuter they ain’t. And they get really old, often outliving their adorable childhoods by 40 or 50 years, with lots of psychological and physical pain for both the ex-actors and the humans who try to care for them.

“A recent study found that 58 percent of retired laboratory chimpanzees show symptoms of depression. What would a study of former child actors find?”

Last month the National Institutes of Health announced that only in the rarest circumstances would it continue making grants for biomedical research involving chimps. The technology now exists to simulate much of what could be learned from experimenting on apes, so why bother? This decision increases the likelihood that the US Fish and Wildlife Service will someday extend endangered-species protection to captive chimps, in effect outlawing them as pets and entertainers.

The NIH’s move followed 2011’s hit sci-fi movie Rise of the Planet of the Apes. This ape-liberation saga marked an important development in movie history, more for its medium than its message (although the storytelling was more astringent than expected). Rise showed that you can make a monkey movie without the monkey: Put Andy Serkis in a performance capture suit, then digitally make him up as a chimp in post-production.

At present, that’s still quite expensive. (Rise had a $93-million budget.) But if Moore’s Law, which predicts that computing power doubles every year or two, stays in effect for another decade and a half, digital chimps will only cost 1/1024th of what they did in Rise.