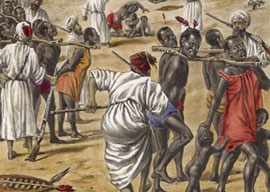 While filling my car with gasoline possibly derived from Middle Eastern oil, I spotted a billboard for a local clothing store called US ARABIA. Though the sign’s head-swaddled male and female models appear to be Caucasian, palefaces are scant in the area around this gas station, so I”ll presume the ad is targeted at an overwhelmingly black local population.

At the local Dunkin” Donuts and Walgreens, I’ve noticed a surge of Georgia-born blacks in Muslim apparel. The festive Afro-nationalist dashikis so popular among American blacks twenty years ago have been replaced with what seems like a dress rehearsal for the global caliphate.

Although Islam and black nationalism share a flame-belching, sword-swinging hatred for Western Civ, it’s an odd pairing when you consider history. American blacks who dump Christianity and shack up with Islam seem to think they”re flipping the bird at the creed that enslaved their ancestors, but they”re only swapping it for a religion that has enslaved their ancestors for far longer.

The idea of collective historical guilt is often wielded as a psychological weapon, and civilizations that allow themselves to be inoculated with the Guilt Germ can be conquered without a shot being fired. Islamic apologists and Western oikophobes scoff and spit and snort that anyone would dare draw equivalencies between the transatlantic and the Arab slave trades, yet the historical record laughs in their faces.

“The idea of collective historical guilt is often wielded as a psychological weapon, and civilizations that allow themselves to be inoculated with the Guilt Germ can be conquered without a shot being fired.”

Though many Westerners have no qualms assigning collective historical guilt to all Caucasians for the transatlantic slave trade, my fatally Western sense of fairness compels me to distinguish between “Arab” and “Muslim.” Just as most white Christians played zero role in transatlantic slavery, it’s safe to assume that most Arab Muslims were at best only passive observers of the Arab slave trade.

As with the term “Jew,” the word “Arab” is a sticky concept involving a murky overlap of Semitic ancestry and religious beliefs. Though not all Muslims are Arab (and vicey-versey), what’s known as the Arab slave trade was primarily engineered by Arabic peoples under the pretense of Islamic expansionism.

But a giant distinction”one that flies right over the recently purchased hijabs and kufis of black American neo-Muslims”is the colossal one that Arabic Muslim slave traders made between themselves and sub-Saharan non-Muslim blacks. Depicting the latter as slow-witted alien infidels is what allowed Arabic Muslims to enslave, torture, and slay them in good conscience.

Many historians harp about how the Arab slave trade was far more humane than the transatlantic slaving biz. If only for spite, I”ll focus on what was far worse about it.

For starters, it predated the transatlantic slave trade by at least 800 years and has outlived it for 150 years and counting. Whereas the bloodthirsty hallucinating pedophile sandworm Muhammad (c. 570-632) owned both male and female black slaves, European explorers didn”t even begin dipping their beaks into the African human-cattle trade in large numbers until the 1500s.

Roughly three centuries later, Europeans and their American descendants took it upon themselves to put the kibosh on slavery. In contrast with Christendom, there was never a concerted Arabic abolition movement, and slavery was only formally outlawed in the Islamic world due to intense outside pressure. But slavery still openly thrives in places such as Mauritania and, on the downlow, throughout much of Africa and the Middle East.

If you count human bodies equally, the Arab slave trade likely shackled at least as many Africans as the transatlantic trade and possibly twice as many. Although early documentation is scarce due in part to a deafening lack of written languages below the Sahara, historical estimates range from a low of eight million to a high of 25 million. In contrast, the general consensus is that around 11 million Africans were transported to the New World”yet only a mere 5% of those wound up in what is now the USA, although the USA gets 100% of the guilt-tripping.