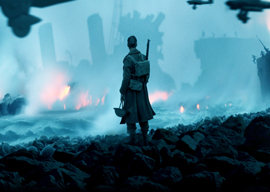 Back in 2014, I ended my Taki’s review of Christopher Nolan’s ambitious but imperfect Interstellar by suggesting that his blockbuster-every-two-years schedule was too rapid even for a writer-director of Nolan’s talents. (Likewise, Nolan’s 2012 Batman movie The Dark Knight Rises had also suffered fit-and-finish problems.) But, I concluded:

So I was there on opening day for 2017’s most anticipated film, Dunkirk, Nolan’s account of the British Army’s narrow escape from the beaches of northern France in the spring of 1940.

Not only has Dunkirk benefited from Nolan taking a few more months than he did on his last several movies, but he has also solved most of my other complaints about his films. Even his impressive 2010 hit Inception suffered from Nolan’s tendencies toward excessive length, overintellectualized complication, and claustrophobia.

If Nolan’s features did only as well at the box office as, say, the Coen brothers” movies, I”d be inclined to downplay his flaws and instead offer eloquent defenses of Nolan’s artful airlessness and propensity to ramp up the cognitive demands of even a Batman movie.

But his films have been so successful, with four grossing over $675 million worldwide, that Nolan’s virtues hardly need my articulation. Moreover, the director does well with critics, too. In a recent Guardian poll of reviewers to anoint the best films of the new century, Nolan tied for first place among directors with three top 100 movies (Memento, Dark Knight, and Inception).

As a non-fantasy and non-sequel film with zero American actors, Dunkirk won”t do Dark Knight-level box office. But Dunkirk may eventually surpass Get Out‘s $175 million and become the highest-grossing Best Picture nominee of this year. A film that is both popular and superb is exactly what audiences need in the midst of a dismal year at the movies.

It’s rare for an extremely successful director like Nolan to fix his own foibles when he’s not under economic duress. (Nolan is alleged to be the current highest-paid director, with a $20 million salary plus 20 percent of the gross for Dunkirk.)

But Dunkirk repairs most of Nolan’s stereotypical failings, with the exception of his trademark inaudible dialogue. In this case, Nolan has several excuses for why his lines are hard to hear:

Second, most of the British enlisted men had regional accents that are baffling to American ears. (Fortunately, Shakespearean actor Kenneth Branagh pops up occasionally as the Royal Navy’s pier-master to explain what’s going on in his high-class, high-bandwidth, once-more-unto-the-breach tones.)

And, best of all, Nolan does such a good job of showing that he barely needs to tell.

Nolan overcomes his usual tendency toward inducing a feeling of confinement in his viewers by filming on location at Dunkirk’s immense flat beach where the northwest edge of the European continent meets the Atlantic Ocean. (Claustrophobia remains a theme of Nolan’s, however: A couple of soldiers plucked from ships sunk by the Luftwaffe refuse to go below decks on their rescuers for fear of being trapped when the new vessel goes down.)

Dunkirk is only 106 minutes long, while Nolan’s previous four movies averaged 158 minutes. Heck, Dunkirk is 34 minutes quicker than the current War for the Planet of the Apes.

To do this, Nolan has stripped out traditional ingredients such as character backstory, motivation, and development. The central character, a very young soldier named Tommy (presumably for Tommy Atkins, the British equivalent of G.I. Joe), is merely trying to get home to survive.

On the land, the tale of the defeated soldiers lining up to await a sealift home plays out over one week;

On the sea, a civilian yachtsman (Mark Rylance at his understated there”ll-always-be-an-England best) sails to the rescue over the course of one day;

And in the air, the RAF fighter pilots (led by Tom Hardy wearing an oxygen mask rather like Bane in The Dark Knight Rises) try to provide air cover with only enough fuel for one hour.

The three stories come together in a giant set-piece encounter in the English Channel. Nolan has lowered the cognitive demands of his film by adding huge amounts of redundancy, with the same events replayed again and again from different angles until you finally understand what happened in all its cruel magnificence.

This isn”t the usual Rashomon-style retelling of a plot from conflicting perspectives. Instead, it’s more like sports broadcasting, such as showing multiple replays of that Tom Brady”to”Julian Edelman completion in this year’s Super Bowl.

Critics have tried to position Dunkirk as anti-Brexit or anti-Trump. For example, Stephanie Zacharek in Time can”t be restrained from preaching that of course the director shares her enthusiasm for today’s increasingly Third World England, and it’s only the cruelties of England’s shamefully nondiverse history that prevented Nolan from filling Dunkirk with Rotherham Pakistanis:

The casting of “Dunkirk” is near perfect…. The picture is filled with great English faces. But to call them characteristically English faces is wrong. Remember, they”re supposed to be the faces of men who lived more than 75 years ago. Today, the face of England”like that of France or any other European country”is much more racially mixed. Love of country comes with no color or birthplace attached. Nolan doesn”t address that idea directly”the story of Dunkirk is almost exclusively about white men, something that can”t be changed after the fact.

In the future, of course, white men can be dealt with.

In reality, Dunkirk is a nationalist masterpiece. The Anglo-American Nolan (his father is English, his mother American) is an English nationalist, a reactionary elitist slightly to the left of Viscount Castlereagh and slightly to the right of the Duke of Wellington. (Interestingly, Nolan’s younger brother and sometimes collaborator Jonathan Nolan of Westworld fame is more of an American nationalist.)