One if by Land, Two if by Sea 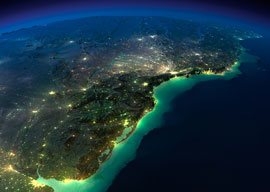 While American geopolitical thought tends to divide the world up morally into the Democratic (whoever is on our side) and the Evil (vice-versa), Russians tend to strategize geographically in terms of Land (Mother Russia) v. Sea (those deplorable Atlanticists).

This dichotomy leads to endless paradoxes. For example, Russian grand strategy has traditionally been obsessed with making the country less of a land power by obtaining non-Arctic ports such as St. Petersburg, Vladivostok, Port Arthur, and Sochi, which is why Sevastopol in Crimea is such an emotional subject for them.

And yet the land-bound Russians never achieved their ultimate goal of taking Constantinople and thus securing a sea route to the Mediterranean. In contrast, the nautical British have held the strategically comparable Rock of Gibraltar at the opposite entrance to the Mediterranean for 310 years, and they appear to be in no hurry to give it back to Spain.

In the American mind, land powers are seen as militarist, brooding, and no fun: Sparta, Prussia, the Soviet Union, and now Putin’s Russia. In contrast, sea powers are the good guys, the cool kids: Athens, Holland, England, and America.

“Sea powers have the privilege to project violence where they please and then go home….Land powers are stuck having to live next to their rivals.”

So what’s not to like? Why doesn’t everybody love us?

It’s worth considering the underlying structural reasons why land powers have traditionally perceived sea powers as, at minimum, annoying hypocrites, if not roving pirates. The French, for instance, routinely denounced England as, in the words of a teasing French comic strip, “Perfidious Albion, which burnt Joan of Arc on the rock of Saint Helena.”

The aristocrats running agricultural land powers tended to preserve backward social systems such as serfdom and slavery. In contrast, commercial sea powers tended to take the lead in abolitionism. Of course, this was only after the seafarers in England and New England had gotten rich off the slave trade.

Even more fundamentally, sea powers have the privilege to project violence where they please and then go home, secure in the knowledge that they can’t easily be followed. Land powers are stuck having to live next to their rivals. They know that propelling themselves forward against neighbors is a grinding process. (It took the Soviets 41 months of supreme effort to push the Germans back from the outskirts of Moscow to Berlin.) Land powers tend to be foreboding rather than flighty. To them, foreign policy is a serious business.

To sea powers, however, mobility means, as the old Navy recruiting commercial said, “It’s not just a job, it’s an adventure.” During the Dark Ages, for example, when the Roman road system had decayed, making land travel laborious, the Vikings could still venture as far as the coast of North America in the west and the rivers of Slavic Europe in the east. Although Russian and Ukrainian nationalists can agree that the Kievan Rus who founded their culture must have been Slavs, the suspicion remains that the initial ruling class consisted of predatory Norse “Varangians.”

To the sedentary monks who wrote most of the few records we have of the Dark Ages, the Vikings were heathen holy terrors. Today, though, with their immense freedom of movement, egalitarian politics, and relatively high status for women, the Vikings seem pretty American.

The land v. sea division in Western thought goes back at least to the differing roles of the Spartan and Athenian allies in the Persian Wars of early fifth-century BC. The number-one movie at the box office last weekend was 300: Rise of an Empire, the sequel to the 2006 hit 300, which was based on Herodotus’s history of the heroic delaying action the Spartan infantry fought at Thermopylae in 480 BC. The new film culminates with the subsequent Battle of Salamis in which the Athenian-led fleet, the “wall of wood” prophesied at Delphi, defeated the Persians.

With the Greeks’ liberation from the Persian Empire, the uneasy alliance between these ideological opposites broke up. Oligarchic Sparta and its allies in the Peloponnesian League went home. In contrast, those city-states that wished to take the war to the Persians, mostly Aegean islands and coastal regions led by democratic Athens, formed the Delian League.