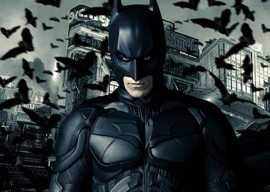 Are criminals in real life ever even one-tenth as fascinating as they are in Christopher Nolan movies? Can you think of a real criminal as intriguing as the late Heath Ledger’s Joker in The Dark Knight or Leonardo DiCaprio’s Cobb in Inception? Or is “master criminal” just a fantasy where filmmakers such as Nolan project their own considerable talents onto a class of dismal individuals?

Whenever some creep shoots a lot of people, as at the Dark Knight Rises midnight showing in Colorado, journalists are expected to generate instant analyses of The Meaning of It All.

Yet if we have to concoct far-reaching theories based on a sample size of one, I”d much rather ponder somebody accomplished and interesting such as Nolan. The director’s first movie, Following, a miniature masterpiece from 1998, demonstrates that Nolan has been fretting for his whole career about this question of whether he’s glamorizing lowlifes by envisioning them as creative leaders of men, as auteurs modeled on himself.

The media has an immense impact on the impressionable. Back in March 2001, I was dispatched to report on the latest Columbine-style school shooting. At Santana High School outside San Diego, a 15-year-old had shot 15 fellow students, killing two.

Why? Within a few hours of arriving, it became obvious to me: The cause of all these high-school shootings in the 1990s and early 2000s had to be journalists such as myself converging on each new schoolyard atrocity. I counted 31 television trucks parked at the police station. At 11:00 PM, nine television correspondents simultaneously launched into their top-of-the-hour spiels.

“In reality, criminals tend to be boring, obtuse, or defective in some wretched way.”

I reported back that all these copycat killings were going to continue until we in the press stopped making these attention-hungry little bastards famous. My editors deleted that.

And they were right, because my prediction turned out to be mostly wrong. There were a few more similar shootings that month, but then high-school massacres (middle-class white kids” division, at least) petered out for years.

What happened? Nobody knows. Perhaps when the Secret Service recommended that students snitch on kids who said they were going to “pull a Columbine,” it actually worked. Or perhaps boredom set in and teens moved on to other dumb fads. Or maybe, perhaps most disturbingly, there was no overarching cause for the rise and fall of school shootings”nor for the preceding trend of post-office workers “going postal””just unlikely but random distributions of running amok that misleadingly struck observers as a meaningful pattern.

You might think that it would be informative to ask the shooters why they did it. After all, in the movies, bad guys are generally rich and educated. Our favorite felons enjoy articulating twisted but philosophically sophisticated motivations, like the thrill-kill cultists Leopold and Loeb did in 1924.

Those two teen prodigies, who had each already graduated from college, murdered a boy to prove they were Nietzschean Supermen capable of getting away with the perfect crime. Yet notice that Hollywood has been remaking the Leopold and Loeb story ever since for want of subsequent examples.

In reality, criminals tend to be boring, obtuse, or defective in some wretched way. And if they aren”t, they listen to their lawyers who tell them to shut up because talking will only make things worse for them.

Nolan, in contrast, is a tremendous commercial filmmaker, comparable to, say, Alfred Hitchcock. His almost humorless style isn”t especially to my taste, however: Almost the only joke in The Dark Knight Rises is that the good guys keep wondering why the villain’s henchmen don”t run away when a vigilante in a bat suit assaults them.