Questions About the Hegira to Germany 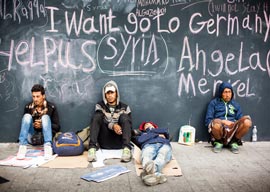 The German chancellor is being celebrated for finally redeeming her subjects” innate Nazi bloodguilt by inviting into the European Union huge columns of helpless Syrian refugees.

Or at least that’s what you are supposed to think, just as you were supposed to assume the innocence of Michael Brown and the guilt of Haven Monahan.

On the other hand, you may have some questions. Such as, if these are civilian war refugees, where are all the women, children, and elderly? Why are the incoming masses instead so heavily made up of young louts with smartphones? One of my readers, Lot, looked at a half-dozen photographs of the new arrivals and estimated, “Overall, these migrants are more male than the United States Army.”

When Jean Raspail prophesied a million migrants invading Europe in his 1973 novel, The Camp of the Saints, he assumed they”d be pitifully malnourished Calcuttans. So why do the colonizers showing up in Europe in 2015 seem generally to be less your tired, your poor, your huddled masses than your strapping fellows, such as the narcissistic bodybuilder on Finnish TV? This refugee documented his trek across the weight rooms and swimming pools of Europe on his Facebook account, and then memorably assured the prime minister of Finland, “I look big, but I”m 17.”

“Why does this reverse VÃ¶lkerwanderung seem to be driven less by hopelessness and more by wanderlust for welfare, work (off the tax rolls, no doubt), and women (especially blondes)?”

And how old are these “children?” The Sweden Report put together a compilation of pictures that have appeared in the credulous Swedish press of purported 14-year-old refugees, including one official adolescent who could be played well on television by 54-year-old comedian Tim Meadows.

Why does this reverse VÃ¶lkerwanderung seem to be driven less by hopelessness and more by wanderlust for welfare, work (off the tax rolls, no doubt), and women (especially blondes)? Are these 800,000 that Germany expects (but wants to palm many off on the rest of Europe) just the forerunners of large extended families?

Did the Wanderings of the Peoples, a process precipitated when the ill-fated Emperor Valens invited the Hun-harassed German barbarians to cross the Danube in 376 A.D. in order to refill his treasury with their tax payments, work out well for the Roman Empire?

Is it a tradition for Muslim settlers to trek en masse like this to a welcoming destination? In fact, it’s the oldest Muslim tradition. Year one of the Muslim calendar is set to the hegira of 622 A.D., in which Muhammad encouraged his followers to emigrate in small groups from unfriendly Mecca to trusting Medina.

And is it really good for the Jews of Europe for Berlin to pay for vast numbers of anti-Semitic Muslim youths to colonize the Continent? How did the hegira work out for the Jews of Medina? (That’s a rhetorical question: The Prophet eventually had 700 Medina Jews executed.)

If Muslim mass migration is so good for the Jews, why did the Jewish state respond to the triumph of the migrants by starting construction of Israel’s last border fence the next morning? (Israel, of course, has not offered to take any Syrians, especially not to resettle them in its underpopulated Golan Heights, which the international community legally considers to still be Syrian territory.)

How many Syrians are coming from peaceful refuges in Turkey and Lebanon?

And are these guys really all Syrians? Or are many opportunists from other Muslim countries getting in on the action? Are we witnessing a massive exercise in identity fraud? The Sidney Morning Herald reports that the ground in Serbia just outside the EU/Hungarian border is littered with discarded identity cards from peaceful Muslim countries, such as Pakistan and Kosovo.

Why is it that when Viktor Orban of Hungary tried to defend the European Union as a whole from the onslaught from other continents, he was denounced as a vicious, divisive anti-European nationalist (and no doubt outright Nazi Hun), but when Angela Merkel opportunistically trashed by German fiat the EU consensus against mass importation of Muslim youths, she was hailed as a great European?

In the era of the smartphone, how does it make sense to continue to run a refugee program based on people showing up in person? Shouldn”t asylum seekers apply online?

Why can”t Persian Gulf petro-states take in their fellow Arabs (for example, Qatar is spending $200 billion to spruce itself up for hosting the 2022 World Cup)? Because Gulf insiders have no intention of letting a bunch of fractious and violent Syrians into their country.

By the way, when does the world run out of migrants who are less rich than Europeans? How does Merkel setting the precedent that any lively lad who shows up on the EU’s turf claiming to be a refugee deserves asylum play out in the long run?