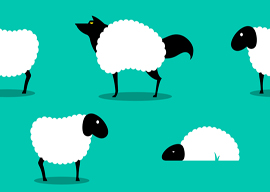 If you want to understand Hillary Clinton’s campaign for president, a good place to start is the current libel trial against Rolling Stone for publishing Sabrina Rubin Erdely’s ridiculous hate hoax article, “A Rape on Campus: A Brutal Assault and a Struggle for Justice at UVA.”

As I pointed out in Takimag on Dec. 3, 2014, Rolling Stone posted Erdely’s 9,000-word blood libel on Nov. 19 about how a U. of Virginia freshman coed named Jackie had been gang-raped on broken glass by seven fraternity brothers as part of an initiation ritual.

That night a mob of Social Justice Warriors reenacted their own Kristallnacht, smashing the windows of the Phi Kappa Psi frat house. (No one has ever been arrested for this hate crime.)

The fraternity’s litigation against Rolling Stone is upcoming, but the current trial is over the $7.85 million case brought by Nicole Eramo, the UVA bureaucrat who counseled Jackie Coakley. Erdely portrayed Eramo as a sort of sonderkommando in charge of covering up all the young women raped by the vicious blond white male Republican power structure at UVA.

That the people who knew Coakley best at UVA didn”t take her ever-changing lies seriously just convinced Erdely that they were all part of the rape-culture conspiracy too.

In reality, Eramo is a typical campus administrator with the usual feminist attitudes. But Erdely was so curdled with rage at the very existence of a college founded by arch-WASP Thomas Jefferson that she seized upon even such an unlikely villainess as Eramo.

Although merely a modest staffer, Eramo has a difficult legal hurdle to overcome in winning justice from Rolling Stone because the judge declared her to be a “limited purpose public figure.”

(Bizarrely, the judge also ruled that hoax artist Jackie Coakley is only to be identified by her first name, and he merely required her to give a deposition on tape”on which she repeatedly claimed memory loss due to post-traumatic stress disorder.)

If Eramo had been deemed a private figure, she would just need to prove that the “defamatory falsehood was negligently published.” But as a limited purpose public figure, Eramo must present “clear and convincing evidence“ of “actual malice,” which means either awareness of publishing a lie or at minimum a “reckless disregard for the truth.”

One man flung a bottle at Jackie that broke on the side of her face, leaving a blood-red bruise around her eye.

Yet the libeled Eramo will have a hard time getting justice because Erdely may have been a true believer in the nonsense that Coakley concocted. Here are excerpts from a taped conversation between Coakley and Erdely in which the well-matched pair egg each other on. Indeed, the coed seems like the more dominant personality, glibly validating whatever academic anti”male chauvinism the nerdier Erdely suggests.

The bigger picture is that we live in a culture where a liberal Jewish feminist journalist like Erdely is paid well to vilify as haters those she hates, and is seldom asked to recognize that she’s projecting her own racist animus upon the victims of her bigotry such as Eramo and Phi Kappa Psi.

Because of how much insight it offers into Hillary Clinton’s America, here’s the key thing to remember about the Haven Monahan hoax: Virtually every single professional journalist in the country believed (or at least submitted to) the Erdely-Coakley bad craziness. The New York Times, for instance, treated it as gospel.

The first journalism professional to question this lurid clusterfake was financial editor Richard Bradley on his blog five days after publication. The next day I posted a few comments on his site, such as:

Wouldn”t the rapists get cut by the broken glass all over the floor, too? I guess they were such sex-crazed animals that they didn”t notice the glass cutting their hands and knees for the first three hours.

I came back a few days later to find nobody else had yet posted a comment, at which I point I added:

Sorry to keep coming back to this, but I”ve done some more thinking and here’s where the story falls apart: pitch darkness _and_ broken glass on the floor. The glass table is smashed, but nobody turns on the light to see what happened or where the broken glass is? Instead, each man, having heard the glass table get smashed, still gets down on the floor covered with shards of broken glass, risking not only his hands and knees, but also pulling out an even more personal part of his anatomy, one that he only has one of.

I finally dared link to Bradley’s post on my iSteve blog on Nov. 29, which opened up the floodgates of public skepticism.

Eventually, it turned out that the handsome but cruel (and nonexistent) upperclassman named Haven Monahan was a figment of Coakley’s imagination intended to make jealous a freshman boy she liked named Ryan (who, sensibly enough, kept telling her they ought to just be friends). Coakley went to some trouble to catfish Haven into digital pseudo-existence by plagiarizing extensively from her favorite sappy TV shows, such as Dawson’s Creek.