Stop With the Golems, Already! 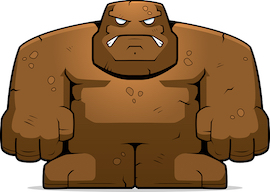 We Jews love our golems. We’ve been loving our golems for thousands of years, and what a strife-free history we have to show for it! In case you’re unfamiliar with the golem fable, I’ll give you the CliffsNotes edition. There’s no one single version of the story, and each retelling might alter certain details, but the unchanging basic narrative is this: Jews are being threatened by Gentiles (no, really?), so a rabbi obsessed with protecting his people builds a giant humanoid monster out of clay (or mud) and brings it to life to defend his beloved shtetl (or village, or kosher deli).

Once the main threat has been defeated, the rabbi, in his lust for vengeance, can’t stop using his golem to right real or imagined wrongs. Soon enough, the golem starts attacking Jews. The monster has now turned its ire on the very people it was built to serve, and the rabbi is forced to battle his own creation.

Get the irony? Because it’s about as subtle as a Buddy Hackett routine. The hellish creature the Jews conjure for their salvation ends up turning on them. A people blinded by fear and paranoia create a demon that metastasizes and grows beyond their control.

It’s been four thousand years. Can we please finally start acting like we’ve learned the lesson of that story?

What is Congressmuslim Ilhan Omar if not a golem? For decades, leftist Jews have been the biggest boosters of flooding the West with Third World immigrants. “Hey, here’s a plan—let’s dump a hundred thousand Somalis in the whitest parts of the U.S. That’ll save us from Fargo Hitler!” Inundating the West with nonwhite immigrants is seen by Jews as an insurance policy against “white supremacy.” The idea is that these immigrants will act as a wedge, diluting “white power” while remaining small enough in numbers to be manageable.

“Can we please finally start acting like we’ve learned the lesson of that story?”

Jews have done this elsewhere—playing two groups against each other as a way of assuring Jewish security. “Let’s play Hamas against the Palestinian Authority. Let’s play ISIS against Assad.” To be fair, this is not a uniquely Jewish strategy. Arguably, the British did this kind of thing to perfection during their colonization craze, playing different ethnic groups and castes against each other for their own benefit. But for people who pride themselves on having an abnormally high IQ, we Jews can be among the most retarded of geniuses, because that strategy no longer works. It used to work when the masterminds, be they Brits or colonial Americans (playing different Indian tribes against each other), could control the flow of information. But today we live in a world in which even the lowliest bark-eater in the Kalahari can have internet access. It’s not as easy to fool entire groups of people anymore (individuals, sure, but not an entire race, ethnicity, or faction). I don’t care how little one might think of Third World intellectual acuity; even a dog will eventually figure out that you’re not really going to throw the ball after ten or twenty fake-outs.

And now we Jews, so worried that Minnesota might become the Frozen Fourth Reich if left in the hands of evil whites, have created for ourselves a good old-fashioned golem in Ilhan Omar (and a bunch of other Third World freshman congressthingies). Yeah, Omar hates whites. Yeah, she thinks “white supremacy” lurks behind every glass of milk and “OK” finger sign. But she hates Jews a hell of a lot more. And here are my people—my brilliant retards—now forced to defeat the monster they created, a monster not only brought about by Jewish-backed policies, but one that mirrors Jewish rhetoric like a pro.

Peas in a pod. And who could have seen that coming? Only every fucking Jew in the world who ever read the golem story.

The reaction of Muslims to the New Zealand shooting has been fascinating to observe. The exploitation of the tragedy, the calls for censorship and suppression of political views, the guilting of “all whites” over something one dude did…Jews could not have done a better job. This is Yo-Yo Ma-level shit, outsiders learning the sheet music of a different culture and performing it better than the originators. In the words of Sato from Karate Kid II, “The student has become the teacher.”

Muslim terrorists murdered twenty Filipino Christians as they attended services in their church two months ago, and do you recall the response from local Muslim leaders? Was it “We must address the anti-Christian bigotry in our community?” Or “We must stand in solidarity with our Christian countrymen?” Nope. It was “Well, to stop us from killing more Christians, let us carve a Muslim-only autonomous region in the country.” That’s literally like whites responding to the New Zealand massacre by saying, “Well, the solution is to keep New Zealand white and Christian. If we don’t have to mix, we won’t have any more race- or religion-based mass shootings.”

How do you think the media would have responded to that? Or the U.N.? Or most Western politicians? But in fact, the world response (and the response from media organs like CNN and the BBC) to the Muzz demand was essentially “Yes! Yes! Give them an autonomous region, so that they needn’t mix with those damn Christians.”

This is a point that bears repeating: A white Christian kills a bunch of Muslims in New Zealand, and the response is “More diversity! More mixing! Force them damn intolerant whiteys to get along, or jail their asses as racists.” Muslims in the Philippines massacre a bunch of Christians, and the response is “Let the Muslims be autonomous! Let them live free of mixing, free of diversity! Let them never have to see another Christian again!”

What we’ve witnessed in the aftermath of the New Zealand shooting is the full maturation of the golem. It doesn’t need instructions from the rabbi anymore. I realized that when I saw a couple of college-age Muzz bimbos berating Chelsea Clinton at a vigil for the New Zealand victims. According to the harassers (who were rewarded for their efforts with a BuzzFeed column), Chelsea’s criticism of Ilhan Omar’s views on Israel “led” to the slaughter in New Zealand.

A murderous Aussie troll mows down Kiwi Muzzies, leaving behind a 74-page manifesto outlining his reasons, not one of which has anything to do with Chelsea Clinton, and yet some ground-level Muzz agitators successfully manage to steer the conversation toward the completely unrelated topic of Clinton vs. Omar as a way of silencing any criticism of the latter’s anti-Israel views.

That is some ADL-worthy shit right there. I mean that. Grudging respect to the Muslims on this one; they may be detestable, but you gotta admire the skill. Abe Foxman in his prime could not have done better.

I think I can best chart the evolution of the golem by recalling the February 2011 Lara Logan sexual assault. CBS reporter Logan was covering the “Arab Spring” in Tahrir Square in Egypt when a bunch of elated Muslim Brotherhood thugs sexually assaulted her. The Brotherhood’s beloved “mufti,” Sheikh Yusuf al-Qaradawi, was a well-known advocate of rape (I mean literally, he was in favor of rape). So after Logan’s rape at the hands of al-Qaradawi’s goons, one would think the blame would fall first on the rapists, and second on their rape-happy spiritual leader. But no! Suzi Parker, a self-proclaimed “anti-redneck” white writing for AOL/HuffPost, put the blame squarely where it really belonged: on Sarah Palin and Ann Coulter! See, within the previous year, Palin had popularized the term “lamestream media,” and Coulter had recently mocked the press during her appearance at CPAC. So of course the rape was the fault of Palin and Coulter, and not the actual rapists or their pro-rape guru.

“Journalist” (and NYU fellow) Nir Rosen, a self-proclaimed “anti-Israel Jew,” added that the reasons for Logan’s rape were irrelevant anyway, because she had it coming for being a “warmonger.”

The unifying factor in the media’s response to the sexual assault was that the Muzzies were not to blame. They were influenced by a white Christian failed vice presidential candidate from Alaska who they’d never heard of (does “lamestream” even translate to Arabic?), and a popular white Christian pundit and author who gave a speech in Orlando to a group they’d never heard of. And besides, they were justified in their rapery because if evil “warmonger” babes don’t deserve a gang bang, who does?

Yet looking back on that 2011 incident, it’s clear that Muslims still had to rely on self-hating whites and self-loathing Jews to do the rationalizing for them. Not so post-New Zealand. The skilled exploitation of the mass shooting, the campaign to attack and silence people who had nothing to do with the killer or his motives, is coming from Muslims. They’ve learned from the best, and now they’re doin’ it for themselves.

FUBU: “For Ummah By Ummah.”
Jews should be particularly afraid of their new Islamic golems. Muzzies might not be smarter than Jews, but they’re stronger and more numerous, and their level of “batshit crazy” is off the charts. Of all the golems the Hebraic high-IQ dunces have created—from the communist state they helped birth in 1917, which later turned on them, to the integration craze they helped create here in the U.S., which now forces them to flee public schools—the Muzz golem has the potential to be the most destructive one yet.

In a perfect world, these rabbinical Rain Men would finally get the fuck over the Holocaust and end their war of hostility against the West. They’d see that whites are no longer the enemy, but indeed the opposite. They’d see that importing foreign mud to mold golem after golem in traditionally white regions of the U.S. is bad strategy.

But the world isn’t perfect, and Jews are our dumbest geniuses. It’ll take a lot more than one or two Ilhan Omars to make them rethink their views. Hell, if the exodus of French Jews from a France now infested with immigrant golems hasn’t altered their thinking, nothing will.

New generations of Jews will continue to read the golem story and learn nothing from it.

We Jews are master storytellers. Trouble is, we prefer telling ’em to understanding ’em. And that’s both frustrating and tragic.