Stranger in a WASP Land 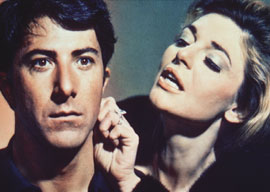 The Graduate, the December 1967 box-office smash starring newcomer Dustin Hoffman as Benjamin Braddock and Anne Bancroft as Mrs. Robinson, is often recounted as a major volley in the history of the Generation Gap. Made on a $3-million budget, it took in over $100 million domestically, which would be around $700 million in 2013 dollars. (In this century, only Avatar has earned more.)

Continuing my intermittent series reinterpreting American history, it’s worth reconsidering what The Graduate was actually about. Looking back from nearly a half-century later, The Graduate seems less like a landmark in the short-lived Generation Gap and more of a milestone in the long-lasting Ethnic Gap.

There’s very little in the film to situate it in the 1960s hippie/protest/drug era. Young Benjamin, for example, wears a coat and tie throughout. Much of the popular image of The Graduate appears to be a projection of Baby Boomers who were then hungry for any kind of cinematic affirmation.

Hollywood seldom adapts nimbly to youth trends because they don’t put young people in charge of making movies, which are costly and easily botched. Thus, The Graduate‘s main contributors were untrustworthy thirtysomethings: Director Mike Nichols was sometimes referred to as a boy genius and the second coming of Orson Welles due to his precocious success directing on Broadway. But he was 36 by the time The Graduate was finished.

Similarly, screenwriter Buck Henry was 37. Producer Lawrence Turman, who had discovered the novel by Charles Webb, was now 41. Bancroft’s character was supposed to be in her mid-40s, but the actress was 36.

And while Hoffman, making his movie debut, could effectively portray a socially maladroit 21-year-old, he was 30. Hoffman had been an Off-Broadway actor for a decade and his milieu had hardly been Haight-Ashbury. He’d shared apartments with two other future stars, neither of whom was ever thought of as the face of the counterculture: Gene Hackman and Robert Duvall.

“Ultimately, The Graduate is about the pain of being Jewish in a gentile society.”

Katharine Ross, 27, played Mrs. Robinson’s ingÃ©nue daughter. And the 26-year-old musicians Paul Simon and Art Garfunkel added much to The Graduate‘s hepness quotient. Still, Simon and Garfunkel weren’t exactly Frank Zappa in terms of alienating the old folks. Their “Mrs. Robinson” was a huge hit on the middle-of-the-road radio station my middle-aged parents listened to in 1968.

The only true 1960s person involved was the eccentric novelist Webb. He had published The Graduate in 1963 at age 24 based on his growing up a wealthy WASP in old-money Pasadena. A committed anti-materialist, he’d already turned down a large inheritance and has spent much of his life since his moment of fame in principled poverty.

The Graduate famously failed to impress the Hollywood old guard when previewed for them. Less well known is that a publicity tour of college campuses that Nichols and Hoffman undertook was not a success, either. Nichols recalls:

In college after college, there was one question: Why isn’t the movie about Vietnam?…No matter what you were doing”if you ran a laundry, your shirts had to be outraged about Vietnam.

The movie took off with Jewish audiences in a few Manhattan theaters and slowly became a juggernaut nationally. It was lavishly praised for being the first movie to plumb the depths of the Generation Gap that suddenly everybody was talking about. Nichols admitted later:

At that particular moment, “the generation gap” was everything. It never even entered our minds! The generation gap? Was it worse than Romeo and Juliet? What’re they talking about?

So what was The Graduate about?

While Benjamin certainly feels beleaguered by his parents’ hearty, talkative friends, they are the only people who will talk to him. He’s an odd choice for the spokesman for the rising generation, since he appears to have no friends his own age.

In fact, Benjamin, with his flat affect, appears to be not quite right in the head.

In the Freudian style of the era, the movie briefly implies that Benjamin’s affair with Mrs. Robinson is a displacement of his Oedipal urges toward his own mother. But a contemporary viewer would possess a more useful vocabulary to describe Benjamin than was available during Freud’s monopoly upon popular psychologizing.

Today, we might call Benjamin an Aspergery nerd, a depressive, and an obsessive-compulsive stalker. In the future, people will no doubt look back and laugh at the crudity of 2013’s psychological categories. Still, you have to admit we’ve at least made progress over the last 46 years by losing interest in Freud’s.

In retrospect, Benjamin Braddock seems like Hoffman’s beta release of his Oscar-winning portrayal of autistic Raymond Babbitt in 1988’s Rain Man. Before his unexpected stardom, Hoffman had made ends meet working as an attendant at the New York Psychiatric Institute, so he had some hands-on familiarity with actual mental disabilities rather than the fanciful ones discussed by the patients of expensive Freudian shrinks.