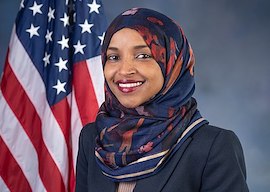 While our society’s growing hate hysteria against straight white men may seem a bit demented, it is actually a logical requirement of the fundamental strategy of the Democratic Party: to mobilize a Coalition of the Margins comprising identity groups—such as blacks, transgenders, Muslims, and Jews—who don’t have much to unite them other than their resentment of old-fashioned Americans.

Hence stoking fear and loathing of core Americans is the one strategy the Democrats have for keeping their constituents from turning on each other.

Newly elected Somali Muslim Rep. Ilhan Omar (D-Mogadishu) was struggle-sessioned by the Democratic leadership into apologizing for pointing out that pro-Israel Jewish-Americans are influential because they contribute a lot of money to politicians.

The Council speaker, Corey Johnson, who is gay and H.I.V. positive…who is exploring a run for mayor…called for Mr. Díaz to resign.

Former NY city council speaker Christine Quinn, a lesbian, had been Wall Street’s choice to succeed billionaire Michael Bloomberg as mayor in 2013. In many big cities, gays are the heart of the more pro-business wing of the ruling Democratic coalition, being whiter and more enterprising. Not having children to worry about, gay men are often the shock troops of gentrification.

Democrats try to unite their fractious constituents around deploring deplorables. Indeed, Hillary gave her disastrous “basket of deplorables” speech to an audience of white gay donors at the Old New York Stock Exchange. Sometimes it works. Other times…

Hijab-covered Congresswoman Omar had been rapturously celebrated in the press as the emblem of diversity…until it turned out that she feels more loyalty to her fellow Muslims than to Israel. The straw that broke the camel’s back was that in reply to Greg Greenwald saying on Twitter:

GOP Leader Kevin McCarthy threatens punishment for @IlhanMN and @RashidaTlaib over their criticisms of Israel. It’s stunning how much time US political leaders spend defending a foreign nation even if it means attacking free speech rights of Americans

It’s all about the Benjamins baby

This is a reference to a 1997 Puff Daddy song about how much the rapper loves money, such as $100 bills, which feature a portrait of Benjamin Franklin (who, even though he was funny, smart, and good with money, was not Jewish).

“People just can’t go around noticing who the politicians’ biggest donors are.”

Omar’s snark set off a berserk reaction among politicians because nobody is allowed to mention that, on average, Jews give more money to politicians than do members of other ethnic groups. People just can’t go around noticing who the politicians’ biggest donors are.

Ms. Omar’s Twitter comment linking money from the American Israel Public Affairs Committee, or Aipac, to political support in Washington for Israel played into anti-Semitic tropes that have their roots in the Middle Ages…. That fueled centuries of stereotypes about Jews using money to control the world….

“What she doesn’t realize is Aipac, like every other advocacy organization in Washington, is exercising its constitutionally protected rights to advocate on behalf of its agenda,” Rabbi Pesner said, adding, “When you call it out and differentiate the Jewish community, it feeds that stereotype of controlling the world.”

Of course, what made Representative Omar’s tweet so outrageous to the powerful was that it is more or less true. As The Jerusalem Post headlined in 2016:

US Jews Contribute Half of All Donations to the Democratic Party

Jewish donors give 25% of the Republican National Convention’s cash.

When asked to explain herself, the congresswoman tweeted:

Now, the American Israel Public Affairs Committee doesn’t itself contribute much directly to candidates, but it goes out of its way to strike fear into the heart of any officeholder thinking of crossing it. As Dana Milbank wrote in his Washington Post column in 2005:

How much clout does AIPAC have?

Well, consider that during the pro-Israel lobby’s annual conference yesterday, a fleet of police cars, sirens wailing, blocked intersections and formed a motorcade to escort buses carrying its conventioneers—to lunch….

Another fact sheet announced that this is the “largest ever” conference, with its 5,000 participants attending “the largest annual seated dinner in Washington” joined by “more members of Congress than almost any other event, except for a joint session of Congress or a State of the Union address.”

In Hans Christian Andersen’s proto-Orwellian story of 1837 “The Emperor’s New Clothes,” swindlers claim that their magic clothes have “the wonderful quality of being invisible to any man who was unfit for his office,” thus shutting up skeptics who fear for their jobs. But then a lone child speaks the truth and shames the crowd into admitting the Emperor’s nakedness.

In reality, as the Darwinian anthropologists with the children’s-literature names of Lionel Tiger and Robin Fox pointed out, more likely the mob would side with the powerful and shout down the impudent brat.

In fact, a recent psychology study suggested that a lone liar might have more impact on a crowd than Andersen’s single honest individual.

Some Jewish zillionaires, such as Leslie Wexner (Ohio State) and Herb Kohl (Wisconsin), are sugar daddies for their state’s flagship football teams.

Fortunately, you are still allowed to make fun of college football boosters. In contrast, noticing the wealth of Israel’s advocates is considered playing into “anti-Semitic tropes.”

For instance, Sen. Marco Rubio (R-FL) took the lead in denouncing Omar for her irreverence toward America’s delicate pro-Israel billionaires. Rubio, cosponsor of the current bill to make anti-Israel BDS boycotts illegal, himself is something of a wholly owned subsidiary of billionaire car dealer Norman Braman, former proprietor of the NFL’s Philadelphia Eagles.

Just how many Jewish billionaires there are is something you are never supposed to talk about…outside of the Jewish press, which finds the topic enthralling. For example, Jewish Business News reported last year:

Jews are disproportionately represented on the roster of the richest business people, with 10 Jews among the top 50 (20 percent), and 38 (19 percent) Jews among first 200 world’s wealthiest.

With Jewish individuals making up only about 0.2 percent of the world’s population, this would suggest they are overrepresented among global billionaires by an extraordinary two orders of magnitude. In the U.S., however, Jewish billionaires are disproportionately represented on the Forbes 400 by only about one order of magnitude.

These striking inequalities might suggest that the many Jewish journalists who have so enthusiastically promoted the concept of White Privilege should worry whether nonwhites follow the same logic to believe in Jewish Privilege.

In today’s race to be More Marginal Than Thou, Muslim Somalis tend not to be impressed by family stories of how great-grandfather had to found his own all-Jewish country club because he was blackballed by a WASP golf club.

But many American Jews were surprised by Omar’s insolence. They appear to be steadily declining in political street smarts, perhaps due to our culture’s implicit ban on satirizing Jewish predilections.

Hence, many liberals Jews are only now beginning to question their self-satisfied assumption that importing more Muslims would be good for the Jews.