The Tart Is Deceitful Above All Things 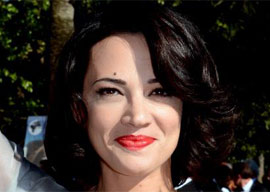 I stopped watching Hollywood movies sometime in the mid-1970s, so when the name “Asia Argento” started popping up amid the #MeToo vagina dentata feeding frenzy last fall, I needed to be informed who she was.

Born in the West, Asia—whose name is a common Italian name for girls, and is annoyingly pronounced “AH-see-ah”—is the child of wealth and privilege. Her father Dario is a famous Italian horror-movie director with an estimated net worth of $16 million, yet like many such types, poor Asia can’t seem to just appreciate being lucky and appears to feel the need to rail against “entitles [sic] westerners” as if she weren’t the very embodiment of an entitled, privileged Westerner.

Last fall, along with the obviously deranged actress Rose McGowan, Asia became one of the loudest barking poodles in the #MeToo movement, which declared that victims should always be believed and that perpetrators should always be destroyed.

As this movement grew like a tumor, countless women came forward to accuse men of raping them. They did this publicly, mind you. And they all appeared to relish the attention. Why, it was almost as if there was nothing vicious, mean, predatory, or damaging about trying to publicly destroy anyone. In an agonizingly high number of cases, hiding behind the Morality Shield seems to be a sly and dishonest way of pretending that one’s abusiveness is mere “justice” rather than malice in action.

As far as I can tell from piecing together the available narratives, both Argento and McGowan claimed that Weinstein “raped” them because they faked orgasms when he was performing oral sex on them. I am aware of no accusations that he physically restrained them or threatened them in any way. But it appears that part of what has driven #MeToo is to massively expand the definition of rape to include any sexual encounter a woman might later regret. For example, in the still pending rape charge against Julian Assange, it appears that his only crime was failing to call his alleged victim the next day.

“At what point does #MeToo become #LookAtMe?”

In Argento’s case, she was apparently so appalled by Weinstein’s shoddy cunnilingual skills that she proceeded to have a sexual relationship with him that lasted four years. Maybe he gives good foot rubs—I don’t know. Or maybe she’ll try to claim that the fact she had to fake an orgasm with him left her so mentally ravaged that she couldn’t help but have sex with him for four more years.

As Americans finally started hearing the name “Asia Argento” en masse last fall, she was having a very public romantic relationship with ex-junkie and white-genocide advocate Anthony Bourdain. In the shamelessly sappy photos that Bourdain posted all over social media of himself with Argento, she maintained the same malevolent gleam in her eye while he appeared to be as pussy-whipped as a mouse impaled on a cat’s claw.

When Bourdain killed himself this June, it was immediately blamed on a fictitious medical condition called “depression,” which pill-peddlers will have you believe is a real disease that is likely entirely unrelated to depressing circumstances in one’s life.

It wasn’t until last week that I learned of the circumstances immediately preceding Bourdain’s suicide.

Three days before the 61-year-old Bourdain hanged himself in a Paris motel room, an Italian magazine published pictures of Argento and 28-year-old French writer Hugo Clement. She is shown hugging him, walking hand-in-hand with him, and giving him severe goo-goo eyes.

Mere days after Bourdain’s suicide, an Instagram account called @justicefortony appeared. What’s significant is that the account was followed by Ottavia Bourdain, who is his estranged wife, the mother of his 11-year-old daughter, and a woman who, despite his betrayals, has respectfully chosen to stay out of the spotlight and has refused to make it all about her—in stark contrast to Argento’s subsequent behavior.

She was a monster to him. She took an already very damaged and very sensitive man and destroyed him. His friends and coworkers tried their best to make him see what was going on, but he would just push everyone away. No one could say anything negative about Asia or Tony would try to remove them from his life….

In the end those pictures [of Argento with Clement] were too much. He must have finally realized what she was doing and his world came crushing down.

The account also says that Bourdain and Argento began fighting right after the pictures had been public. He stopped following her social media accounts.

Then on June 8, after by all accounts the couple had ceased to communicate, Argento posted a picture of herself with a T-shirt that read FUCK EVERYONE. She captioned it, “You know who you are.”
Three hours later, Bourdain killed himself.

It’s quite an accomplishment for someone to make me feel sympathy for Anthony Bourdain. It’s also a testament to Argento’s character that she subsequently posted a photo of herself with a “Suicidal Tendencies” shirt and the hashtag #stayingalive.

Even more distasteful was the fact that Argento made quite the public display of being victimized by—rather than, y’know, being a primary cause of—Bourdain’s suicide. Claiming she was too grief-stricken to even speak, she enlisted Rose McGowan’s dubious literary skills to pen an open letter for Rolling Stone on her behalf:

Sitting across from me is the remarkable human and brave survivor, Asia Argento, who has been through more than most could stand, and yet stand she does. She stood up to her monster rapist and now she has to stand up to yet another monster, suicide.

Stooping even lower, McGowan claimed that both Argento and Bourdain had both struggled with depression, but she didn’t kill herself because she was strong—and he did because he was weak. She also made a point of claiming that the pair had an “open relationship,” which was hard for Bourdain to dispute, seeing as he was dead.

Last Sunday, The New York Times published a story alleging that shortly after publicly accusing Weinstein of raping her after he’d sloppily attempted to orally pleasure her, Argento arranged a $380,000 payoff to a male actor who claims she forced herself upon him sexually in a motel room back in May 2013 when he was only two months after his 17th birthday. At the time, Argento was 37.

The actor, Billy Bennett, had starred as Argento’s son in the 2004 film The Heart Is Deceitful Above All Things, which Argento directed. Bennett was seven at the time, and among other things, the film required him to be raped.

The pair continued a public friendship over the next ten years, frequently shouting out to one another on social media and referring to one another as “mother” and “son.”

Then, when Bennett had just turned 17, he says he and a family member visited Argento in her Marina del Rey hotel room and at some point Argento requested that the family member leave the two of them alone. He says she first performed oral sex on him and then climbed on top of him for a round of intercourse.

He claimed that the experience traumatized him and impaired his ability to work. The fact that few people will believe that a 17-year-old boy can have sex forced upon him seems barely relevant here—what’s pertinent is that he was accusing someone who says all sexual assault accusers should be believed.

She called the report “absolutely false,” claimed she “never had any sexual relationship with Bennett,” and once again managed to blame it on Bourdain, who by her account caved to the obvious extortion attempt and arranged for the payout through his lawyer.

Unfortunately for this narrative, pictures emerged of Argento and Bennett in bed together, as did alleged text messages from Argento where she flatly stated:

I had sex with him it was weird. I didn’t know he was a minor until the shakedown letter.

This, from the woman who’d known Bennett since he was seven and repeatedly referred to him as her “son.”

Then, like all suspected rapists are supposed to do, Argento blamed the victim:

In this case I’m going to believe the accuser. Despite the way modern feminism attempts to frame the discussion as a religious narrative where women are always good and men are always bad, hard experience has taught me that the tart can be deceitful above all things.