The Beaver: Jodie Foster’s Enduring Relationship With the Insane 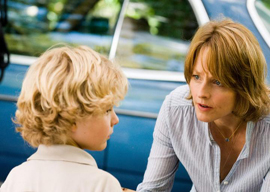 Movie folks think they are better than you or me, and sometimes they are right. Jodie Foster, for example, isn”t the world’s best director, but she may be the bravest. Who else would have the brass to direct her old buddy from 1994’s Maverick and today’s leading object of collective hatred, Mel Gibson, in The Beaver, a good dramedy about hereditary manic depression?

The two stars courageous enough to speak up for Gibson repeatedly (and he needs a lot of speaking up for) have been Foster and Robert Downey, Jr. Gibson stood by Downey during his drug problems, but Foster is rare among stars in that the great scandal of her career”John Hinckley, Jr. shooting President Reagan in 1981 in a demented effort to impress the then Yale coed”was not her fault.

The frostily private Foster wouldn”t seem to need much standing by. Yet The Beaver‘s point is that everybody does. (When this Mayflower descendant needs a friend badly, however, you probably aren”t going to hear about it until she sublimates it into a movie.)

It’s taken me decades to appreciate Foster because she tends to radiate a sense of herself as Homo superior. Granted, this isn”t wholly unwarranted: She was reading at 18 months and earning a paycheck as an actress at three years.

There’s been a strangely enduring relationship between this calmest, most preternaturally professional of actresses and the insane. Her adolescent role in Martin Scorsese’s Taxi Driver as a prostitute who drives an obsessed Robert De Niro into attempting a political assassination morphed into Hinckley’s art-becomes-reality rabbit hole. She won an Oscar sparring with Hannibal Lecter.

In real life, she’s been stalked by two more psychos since Hinckley. Yet even the craziest male maniacs should have gotten the joke that Foster is a little too tomboyish to be interested.

Over the years, Foster has pursued projects dwelling on nature/nurture questions. She directed Little Man Tate, the story of a single mother raising a child prodigy. Her Egg Pictures produced The Baby Dance about surrogate mothering. She then gave birth to a son by an undisclosed sire. She was widely rumored in the British press to have eugenically searched out a handsome scientist with a 160 IQ to be the donor. In Foster’s life, art tends to foreshadow action.

For much of the last decade, Foster struggled with Jewish groups who have so far successfully blocked her most grandiose ambition: to play Leni Riefenstahl, the Nazi film directrix of Triumph of the Will.