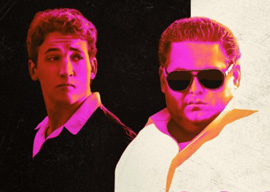 The comic biopic War Dogs starring Jonah Hill as Efraim Diveroli, the 22-year-old Miami Beach international arms dealer whose scandal was a nine days” wonder in 2008, serves as a fun test of my instincts about how the world actually works.

Eight years ago, I went out on a limb to predict that the stoner bro who won a $300 million Pentagon contract to supply AK-47 ammunition to the Afghan army wasn”t going to be the Bush administration’s Watergate or even its Iran-Contra. The more I looked into it, the less it smelled like a vast conspiracy implicating the entire military-industrial complex all the way up to Dick Cheney…and the more it seemed like a Jonah Hill movie.

Diveroli’s grandfather Yoav Botach is one of the richest landlords in Los Angeles. His uncle Shmuley Boteach, author of the best-selling advice book Kosher Sex and star of the reality TV show Shalom in the Home, was known as Michael Jackson’s rabbi.

Another uncle, BarKochba Botach, Diveroli’s former boss, runs a controversial gun shop in South Central L.A. His Botach Tactical is famous for its low prices and notorious for its antagonistic customer service.

“War Dogs“ closest comparison is to Martin Scorsese’s The Wolf of Wall Street. But Scorsese didn”t have the courage to make the ethnic angle explicit.”

“Overall, it just sounds like a whole family full of self-starters,” I observed.

A couple of days after the news broke in The New York Times, I offered “A General Theory of the Afghan Ammo Swindle“:

Have you ever tried to buy a camera from the ads in the back pages of a camera magazine?… A friend bought a camera from one once, and it turned out to be a horrible experience. The package showed up very late, was missing essential pieces, and when he called to complain the customer service rep acted hostile and tried to sell him more stuff he didn”t want rather than fix his problem….

I asked him…what time do they close business on Friday?

A satisfied customer named Steve Levine once wrote in praise of the famous photography store B&H (which is jokingly referred to as “Beards & Hats”):

Interestingly, B&H was the first “Hasidic”-owned camera store that decided to treat customers like human beings. In the pre”B&H days, all of the NYC camera stores were nearly impossible to deal with.

The old business model was bait and switch. Greedy, foolish goyishe kops didn”t deserve honest dealing. It’s an easy way to make money if you just don”t care when your rightfully angry customers scream at you over the phone. Most people don”t like being confronted when they”re guilty of breaking promises, but if it doesn”t bother you, then you”ve got a bright future in this kind of business.

Diveroli was simply applying the I-can-get-it-for-you-wholesale lessons he”d learned in retailing to international arms dealing. His career sounded like every funny story anybody had ever heard about Jewish business practices going back to Budd Schulberg’s What Makes Sammy Run?

Eventually, magazine reporters delved deep into the tale and confirmed my hunch. Ironically, the Pentagon’s online procurement system that Diveroli exploited was set up in response to complaints that Cheney’s old company Halliburton was getting too much business in Iraq.

Amusingly, Diveroli’s firm was listed as qualifying for affirmative-action privileges for being “minority-owned“ and “disadvantaged.” Why? Because he checked the box as “Hasidic,” even though he never grew his beard longer than Don Johnson had on Miami Vice. (In 1984, the Reagan administration had declared the Hasidim an oppressed minority for purposes of government contracting.)

In 2011, actor Jonah Hill tried to buy the rights to Guy Lawson’s Rolling Stone article about Diveroli because, he said, he wanted to star in a movie about “hustler Jews from Miami.”

But The Hangover director Todd Phillips, born Todd Bunzl in Brooklyn, turned out to be “richer and faster.” (Speaking of men with gold chains, Phillips always does an Alfred Hitchcock-style cameo in each of his films, such as Old School, as “Barry,” a velour-tracksuit-wearing sleaze with a necklace sporting a Hebrew symbol.)

Ultimately, the two rivals for the rights teamed up to make War Dogs with Hill as the sociopathic Diveroli and Miles Teller (of Whiplash) as his dweeby partner David Packouz.

War Dogs is a solid mid-budget movie of the kind Hollywood doesn”t make enough of anymore. The rising arc of the first two-thirds of the film as the friends make their big score in Albanian ammunition is an exhilarating buddy business comedy.

The screenplay is fairly factual, although the action highlight”smuggling 5,000 pistols through Iraq’s Triangle of Death”is lifted from the lives of two other American salesmen.

On the other hand, the last third of War Dogs is a bit of a downer as the dudes get in legal trouble for not telling the Pentagon their Albanian ammo was actually made in China, which was still embargoed because of Tiananmen Square. Fittingly, they got ratted out by the only honest businessman in the movie, the “box guy” in Tirana whom Diveroli stiffed on his modest fee for repacking the banned Chinese bullets in Albanian cardboard.